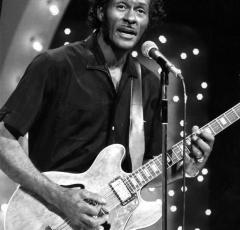 Rock and roll pioneer Chuck Berry, performed in the Washington area numerous times during his career, including a July 1979 performance at the White House for President Jimmy Carter. But one of his most memorable local shows came a few years earlier, on April 28, 1973, when he played a show at the University of Maryland with fellow rock legend Jerry Lee Lewis, and an opening act who would go on to become one of the biggest superstars in rock — Bruce Springsteen.