For over 40 years, Claude Moore Colonial Farm was a well-preserved time capsule of 18th-century farm life in northern Virginia. Since the early 1970s, costumed staff and volunteers lived as if it was the year 1771. They grew and cooked their own food, sewed their own clothes, and raised their own livestock. But after a tumultuous battle with the National Park Service, the colonial farm in McLean, Virginia permanently closed its doors on December 21, 2018. The National Park Service hosted an open comment period, which ran through April 25, to decide the future of the land. 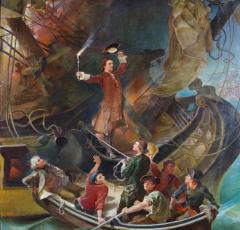 Today marks the anniversary of the Boston Tea Party on December 16, 1773. Over 200 years after it happened, the incident remains one of the most popular images of the Revolutionary period. That’s no surprise. After all, there’s a certain romanticism to the story of costumed colonists dumping crates of valuable tea into Boston Harbor.

But, while the Boston protest remains the most famous demonstration against the British taxation measures, it was not the only one. There were protests throughout the colonies and one of the most dramatic played out in our own backyard — Annapolis, Maryland — in 1774.