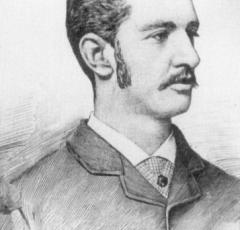 Georgetown University has some pretty prestigious professors. But did you know the school once had an imperial prince on their staff? Don Agustin de Iturbide y Green, with a name as weighty as the Infanta, taught Spanish and French at Georgetown near the end of the 19th century. How did Don Agustin, the heir to two emperors, end up in elbow pads? It’s sort of a long story, which takes us from Georgetown to Mexico to France and back.

The Rosedale estate in Georgetown was the grand home of Alice Green, granddaughter of Revolutionary War General Uriah Forrest and great-granddaughter of Maryland Governor George Plater. This belle was basically American royalty, which was great for when she married Don Angel Maria de Iturbide y Huarte, the exiled prince of the Mexican imperial line and a student at Georgetown University. By the time the lovebirds met and wed, Angel’s father, Agustin the First, had been deposed and executed. Although Alice’s husband and their son, Agustin, had a technical claim to the throne, few suspected that Agustin I’s nine-month rule would bring his descendants anything.

An Evening at the White House with Johnny Cash

L'Enfant's Guide to Getting Fired