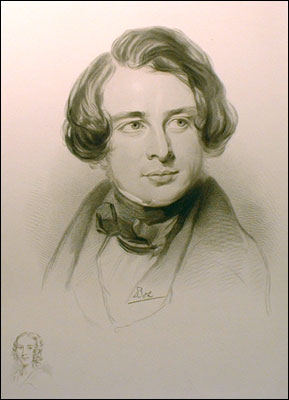 Self portrait by Charles Dickens during his American tour in 1842. The women in the bottom left is his sister, Fanny. (Source: Wikipedia)
When Charles Dickens visited Washington in 1842, he had a lot to say. But, perhaps nothing caught his eye -- and ire -- as much as Washingtonians' obvious love of chewing tobacco.

As Washington may be called the head-quarters of tobacco-tinctured saliva, the time is come when I must confess, without any disguise, that the prevalence of those two odious practices of chewing and expectorating began about this time to be anything but agreeable, and soon became most offensive and sickening.

In all the public places of America, this filthy custom is recognised. In the courts of law, the judge has his spittoon, the crier his, the witness his, and the prisoner his; while the jurymen and spectators are provided for, as so many men who in the course of nature must desire to spit incessantly.... In public buildings, visitors are implored, through the same agency, to squirt the essence of their quids, or 'plugs,' as I have heard them called by gentlemen learned in this kind of sweetmeat, into the national spittoons, and not about the bases of the marble columns.

But in some parts, this custom is inseparably mixed up with every meal and morning call, and with all the transactions of social life. The stranger, who follows in the track I took myself, will find it in its full bloom and glory, luxuriant in all its alarming recklessness, at Washington. And let him not persuade himself (as I once did, to my shame) that previous tourists have exaggerated its extent. The thing itself is an exaggeration of nastiness, which cannot be outdone. (American Notes for General Circulation by Charles Dickens, Chapter VIII)

Dickens was clearly surprised to see Senators and Congressmen spitting plugs in the Capitol but maybe he shouldn't have been. After all, the District of Columbia was located on land ceded by two of the biggest tobacco producing states in the country, Maryland and Virginia. Tobacco had always been a major part of the local and national economies, and a big part of American culture, too. Heck, even some of the U.S. Capitol building's columns are engraved with tobacco leaves!

As customs changed over time, chewing tobacco use in Washington's public places started to decline. Still, it was quite common well into the 20th century as evidenced by the photo below showing two U.S. Capitol custodians cleaning out spittoons in 1914. Sorry to gross you out, Mr. Dickens! 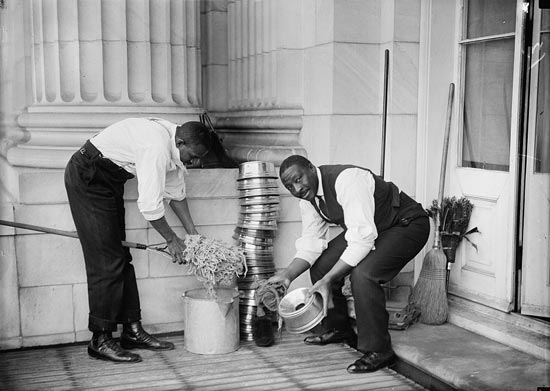