Alright, this is big news. Tomorrow, the Washington Nationals will announce a new Racing President to run against George Washington, Thomas Jefferson, Abraham Lincoln and longtime-lovable-loser-turned-late-season-winner, Teddy Roosevelt at each Nationals home game. D.C. is waiting with bated breath.

So, who will it be? Here at Boundary Stones headquarters, we've been debating the issue all week and identified a few leading candidates. Give these nominations a read and then tell us your vote in the comments below! 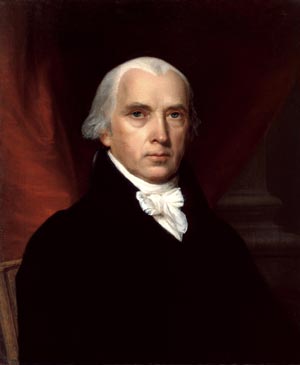 Portrait of James Madison by John Vanderlyn. (Source: Wikipedia)
There’s a tendency in sports to root for a little guy. Well, you couldn’t get littler than the fourth president of the United States, James Madison. Standing at five feet four inches, “Little Jemmy” is the shortest of our nation’s presidents.

Though small in stature, Madison is credited with a lot of big deeds; he was instrumental in the adoption of the Constitution and the subsequent Bill of Rights. He was a major contributor to the Federalist Papers along with Alexander Hamilton and John Jay. Madison partnered with Jefferson to organize the Democratic-Republican Party. Madison valiantly led the country through the War of 1812, considered “the second war for independence”, even as the war came quite literally up to his doorstep. His final years as president saw the beginning of a period of valued peace and prosperity, “The Era of Good Feelings”.

This little guy who accomplished so much, who had a marvelous woman behind him (Dolley Madison, ‘the first First Lady’!), would be a great addition to the Nationals' Presidents race. 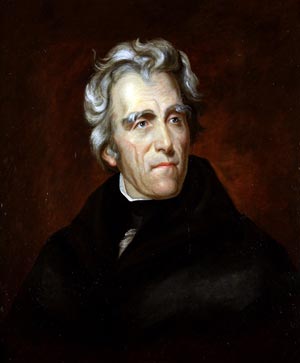 Portrait of Andrew Jackson in 1824 by Thomas Sully. (Source: Wikipedia)
Something tells me the other Racing Presidents are hoping Andrew Jackson is not selected as their new foe. Nicknamed "Old Hickory" because of his toughness and aggressive personality, Jackson was well accustomed to combat... and victory. He was known to fight in duels, some of which were fatal to his opponents, and had a long military career before being elected President.

At the age of 13 he served as a courier in the Revolutionary War was taken prisoner by the British. While in captivity he almost starved to death and was slashed with a sword after refusing to shine a British officer's boots. But all this did was increase his resolve and fortitude. In 1815, he got his revenge, leading an outnumbered American force to a resounding victory over the British at the Battle of New Orleans. It was the United States' biggest land victory of the War of 1812 and sent the Brits scurrying for their ships.

In politics, Jackson was a man of the people (just ask those who attended his raucous Presidential Inauguration party in 1828) but he was also fierce. He expanded the power of the presidency, grew the spoils system and ushered in a new era, which came to be known as Jacksonian Democracy.

All of these qualifications make Old Hickory a great candidate to be the new Racing President. But, perhaps even more importantly, he has a forehead and coiffure that would look amazing when blown up to eight times their natural size. 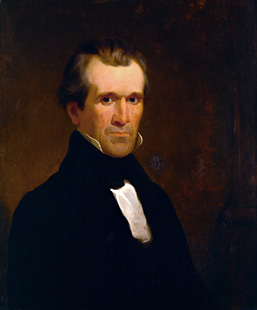 Portrait of James K. Polk by Minor K. Kellogg c. 1840. (Source: National Portrait Gallery)
James K. Polk is the dark horse candidate for the new racing president, and honestly, he's probably not even in the running at Nationals Park. The public didn't really know who he was when he ran for President - he's been described as the first "dark horse" candidate to win a major election. But as he proved during his one-term presidency, Polk knew how to get things done.

Polk is one of the only politicians in history to actually keep all of his campaign promises, and he set the bar pretty high. In his stump speeches, Polk set five goals for himself: to annex New Mexico and California, gain all or part of Oregon, reduce tariffs, reestablish an independent treasury, and only run for one term. Having accomplished the first four goals, he did not seek reelection in 1849. If Polk promises to win 40 races at Nationals Park, you know he will win 40 and only 40 races.

Plus, he comes with his own theme music! In 1996, They Might Be Giants released "James K. Polk," part tribute and part history lesson to our 11th president. Wouldn't it be great to hear a musical saw solo reverberating through the Southeast Waterfront? 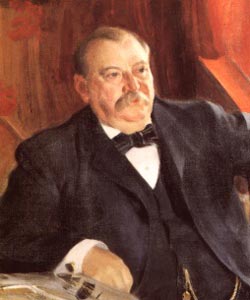 Portrait of Grover Cleveland by Anders Zorn. (Source: Wikipedia)
Stephen Grover Cleveland, our 22nd and 24th President (that’s right… no consecutive terms for this man!). He is steady. He is a hard worker.  He is ready to TAKE THE FIELD!

He got into politics without having to work for it.  He ran for mayor of Buffalo because he was asked to AND HE WON! He was a congressional watchdog and he had to deal with a depression…. He was hardworking and independent…. He was able to give his presidential speeches from memory. OK, so he threatened London with war, but you have to respect his fearlessness.

"Big Steve" as he was known to his friends (and “Uncle Jumbo” to others) was pretty sizeable in girth. He could probably give Taft a run for his money in the weight stakes. He may not be the most exciting man, but what a cool middle name. AND he shares a name with another famous Grover who is near and dear to our hearts! 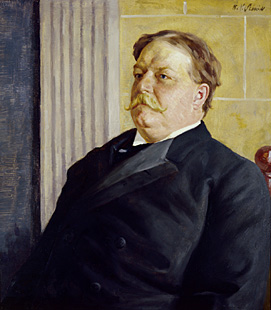 Portrait of William Howard Taft by William Valentine Schevill c. 1910. (Source: National Portrait Gallery)
OK -- let's get the physical aspects out of the way right now.  Taft was indeed a corpulent man, this is undeniably true. But from the standpoint of a "running" president -- his wide body alone could be worth the price of admission. (There is no historical evidence that Taft ever actually ran anywhere -- so that's comedy right there).  Imagine also the costume possibilities, and the prodigious head with the quite in vogue Edwardian mustache -- it all works.  And when it comes to sight gags, nothing works better than a fat man. There is a long tradition of this (Fatty Arbuckle, Oliver Hardy, Lou Costello, John Belushi, etc.). Plus, the man didn't take himself too seriously. Here's an example: after Taft lost the election of 1912, Yale University suggested that Taft accept a Chair of Law at the University. Taft replied that a Chair would not be adequate, but that if the University would provide a Sofa of Law, "it might be all right".

We should probably also mention that he was the only President to also serve as Chief Justice of the Supreme Court -- so he technically outranks all the other running presidents by presiding over 2 out of the 3 branches of government.

And -- if all that isn't good enough -- there's his most famous contribution to baseball, and it took place right here in Washington! While attending a game between Senators and the Athletics, the rotund, six-foot-two president reportedly grew more and more uncomfortable in his small wooden chair. By the middle of the seventh inning he could bear it no longer and stood up to stretch his aching legs -- whereupon everyone else in the stadium, thinking the president was about to leave, rose to show their respect. A few minutes later Taft returned to his seat, the crowd followed suit, and the "seventh-inning stretch" was born. 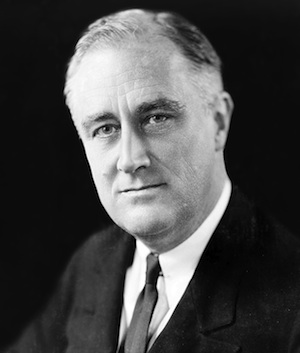 The obvious choice for our newest Nationals Racing President is Franklin Delano Roosevelt. His pedigree is impeccable. He makes every single Best Presidents Ever list in existence. Why? Because he is the man. Literally (as our current Vice President Joe Biden would say).

FDR served four terms as our Commander-in-Chief, won World War II, handled the Great Depression, established the minimum wage, created Social Security and other New Deal programs, and I’m sure had a bunch of other major accomplishments I’m leaving off this list – and he did it all from a wheelchair. There’s no reason FDR can’t handily beat George, Tom, Abe and Teddy from a wheelchair too. Is an FDR pick a controversial one? Possibly. The addition of a Racing President with a disability might give some fans pause. But the fact that FDR achieved so much – literally, the man changed the world – despite the daunting personal circumstances he faced should be celebrated as the inspiration that it is. (Also, really, have you seen Abe run? FDR could have a HoverRound with a jet engine in it and no guarantee of victory.)

Other bonuses of an FDR selection include an easily recognizable appearance (his cigarette holder, glasses and pointed chin are pretty iconic) and a built-in family rivalry with his cousin Teddy. And he’s already got a monument in town, so we won’t have to change the race’s intro video much. Bonus points for the prospect of fireside chats in the offseason and the possibility that beloved First Dog Fala could appear at any moment. (Photo ops with Fala? Let me get in line right now.) 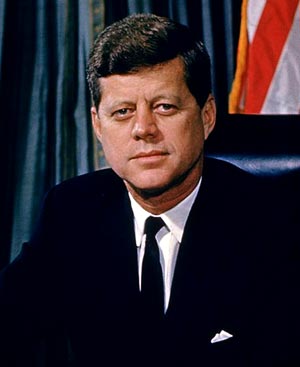 John F. Kennedy photograph by Alfred Eisenstaedt, White House Press Office. (Source: Wikipedia)
My vote for the newest Racing President goes to our 35th Commander-in-Chief, John Fitzgerald Kennedy. Why, you may ask? Because what does out team have going into the 2013 season? Hope! We were Division Champions last season – and this year, we’ve got Stephen Strasburg back full time, a sick pitching rotation and a line-up that includes multiple Gold Gloves and the 2012 NL Rookie of the Year! Nats Nation expects big things from our team in 2013, and who better to inspire us to even greater heights (coughWorldSeriescough) than the man who first encouraged our nation to go to the moon?

President Kennedy inspired our nation from the Oval Office, and now he can inspire our city from the Nationals Park infield as he dominates the rest of those older gentlemen with his athletic prowess and shows off his impeccable fashion sense. (Just imagine the hair!)  To this day, Kennedy remains an almost mythical figure in America political history – a great athlete, a best selling author, a war veteran, a volunteer and, of course, an infamous ladies man – he is instantly recognizable and an easy caricature in the style of our current Racing Presidents. Known for his good looks, Jack will basically become the George Clooney of Nats Park instantly. Lines for photos with him will be enormous.  Admittedly, he doesn’t have a monument, but he does have the Kennedy Center, so we wouldn’t even need to change the races’ opening montage. Kennedy inspired America to dream big dreams – and there is no bigger dream in DC this year than the Nats’ postseason prospects. Let’s embrace it. Maybe he can even give the crowd speeches before important games begin. 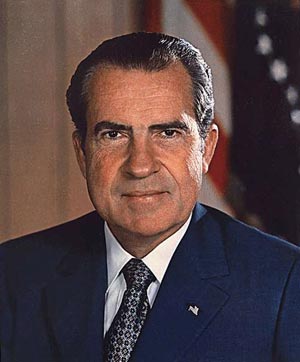 Richard Nixon c. 1973. (Source: Wikipedia)
Nixon’s troubled history presents the perfect character for fans to cheer AGAINST. The presidents currently featured in the National’s race are tame compared to our 37th president, whose exploits coined the suffix “-gate” to mean any great scandal. Nixon presents a unique opportunity to introduce an antagonistic character to the proceedings, even allowing for occasional wins through cartoonish cheating.

Imagine the scene: a friendly race between dead presidents when, who’s that?! Richard Nixon! The referee, involved in some shenanigan of Teddy Roosevelt, fails to notice as the notorious Nixon shoves his way through the pack to cross the finish line. The crowd boos at Nixon and laughs at the antics of the other presidents who are comically enraged at Nixon’s triumphant win. I can’t think of a better or more sinister addition to the race.