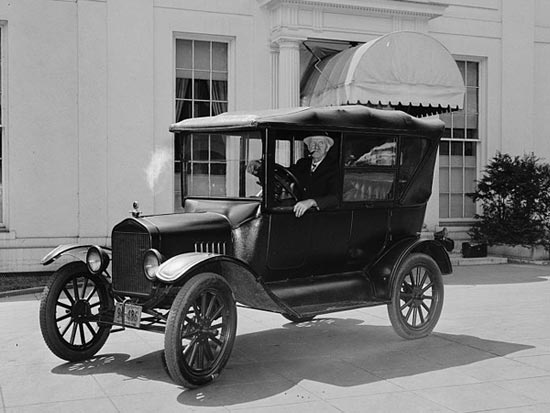 Ford Motor Company super-fan Ernest Franke, a retired D.C. baker, drove circles around the White House hoping to show off his 1921 Ford model to Henry Ford when the car magnate met with FDR on April 27, 1938. Franke eventually was shooed away by guards. (Source: Library of Congress)

In April 1938, the country was still trying to pull itself out of the Depression and there was a lot of conversation and debate about the role of government in business. (Hmmm… Sound familiar?) So, when car magnate – and frequent critic of FDR’s regulatory New Deal policies – Henry Ford accepted the President’s invitation to come to the White House for a private luncheon and discussion, it was big news.

A few days before the meeting, columnist H.I. Phillips wrote a satirical mock preview of the conversation. Clearly, he did not anticipate a meeting of the minds.

President: Henry, what I want to know is what you would do if you were in my shoes.
Henry: Shoes wouldn’t make any difference; we’re in a situation now where we are swimming, not hiking.
President: You know what I mean; if you were President what would you do?
Henry: Well, for one thing, I wouldn’t run the car without having the brakes adjusted.
President: My brakes are alright.
Henry: Do they hold?
President: No; that’s what makes the ride so exciting!
Henry: Speed is a great thing and I emphasize it in the sales talks, but there are other things just as important.
President: What?
Henry: For one thing, you’ve got to have good headlights.
President: Now, Henry, you’re no fellow to talk about headlights. I never saw a Ford with both headlights working except once.
Henry: Where was that? I heard there was one, but I’ve never been able to trace it.
President: Getting down to cases, I can’t understand why you aren’t with me heart and soul. You were a pioneer in giving labor higher pay and a better break.
Henry: I’m glad to know somebody remembers that. My point, Mr. President, is that I think an employer is also entitled to a break.
President: Where did you get that idea?
Henry: I think it must have been in a book.
President: Don’t tell me you have read a book, Henry!
Henry: Why not? There’s not much else an auto manufacturer can do these days.
President: Are you against Government in business?
Henry: Yes. I hate to think what would have happened to Lizzie if I’d had to raise her under Federal supervision.
President: You believe in spending vast sums if necessary, don’t you?
Henry: Yes, but you never can convince me that when the car has broken down all you’ve got to do to make it work again is to keep doubling the orders for oil, gas, new tires and expensive varnish.
President: You’re like all industrialists; you criticize without making any helpful suggestions. Why don’t you tell me what I ought to do?
Henry: How do I know you’d listen?
President: I listen to everybody.
Henry: That’s the trouble!
President: And they told me all the knocks had been taken from the Fords!
Henry: Well, we don’t seem to be getting anywhere in this chat. But it’s nice seeing you, just the same.
President: What was the crack you made about coming here to show me a man who didn’t want anything?
Henry: Oh, I said something like that to a reporter. And I mean it. I ain’t asking a thing. There’s nothing I want from the Government.
President: Up in the attic I found some of the finest antiques last week. There’s a fiddle up there that must be 200 years old and a…
Henry: Oh, well, that’s different.[1]

(This last bit was a reference to Henry Ford’s wildly popular auto show fiddle contests of the 1920s.) 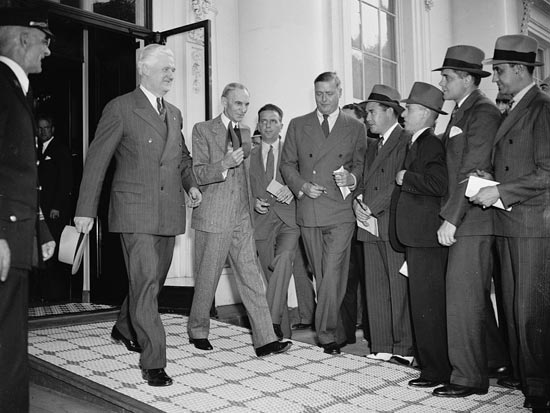 Henry Ford and his entourage leave the White House after their meeting with President Roosevelt, April 27, 1938. (Source: Library of Congress)

On the morning of April 27, hundreds of newsmen and gawkers gathered outside of 1600 Pennsylvania Avenue hoping to see Ford and hear his take on the meeting. As it turned out, however, they would be disappointed. Ford was dropped off at the entrance to the mansion and whisked inside without commenting. After the meeting he rebuffed questions from the press and headed quickly to Union Station, where he caught a train to New York. The White House also declined to comment about what was discussed.

Perhaps no one was as disappointed by Ford’s quick entry and exit as Ernest Franke, an elderly retired baker who lived at 1366 C St., SE. He washed and shined his 1921 model Ford and spent the morning driving circles around the White House, hoping to show Henry Ford how well it still ran after 17 years. As the Ford super-fan told the press, “My speedometer broke after it reached 500,000 miles, and so I don’t know how far this thing has gone but it’s a plenty.”[2] White House guards eventually shooed him away, so Franke never even got a glimpse of his hero. Bummer.