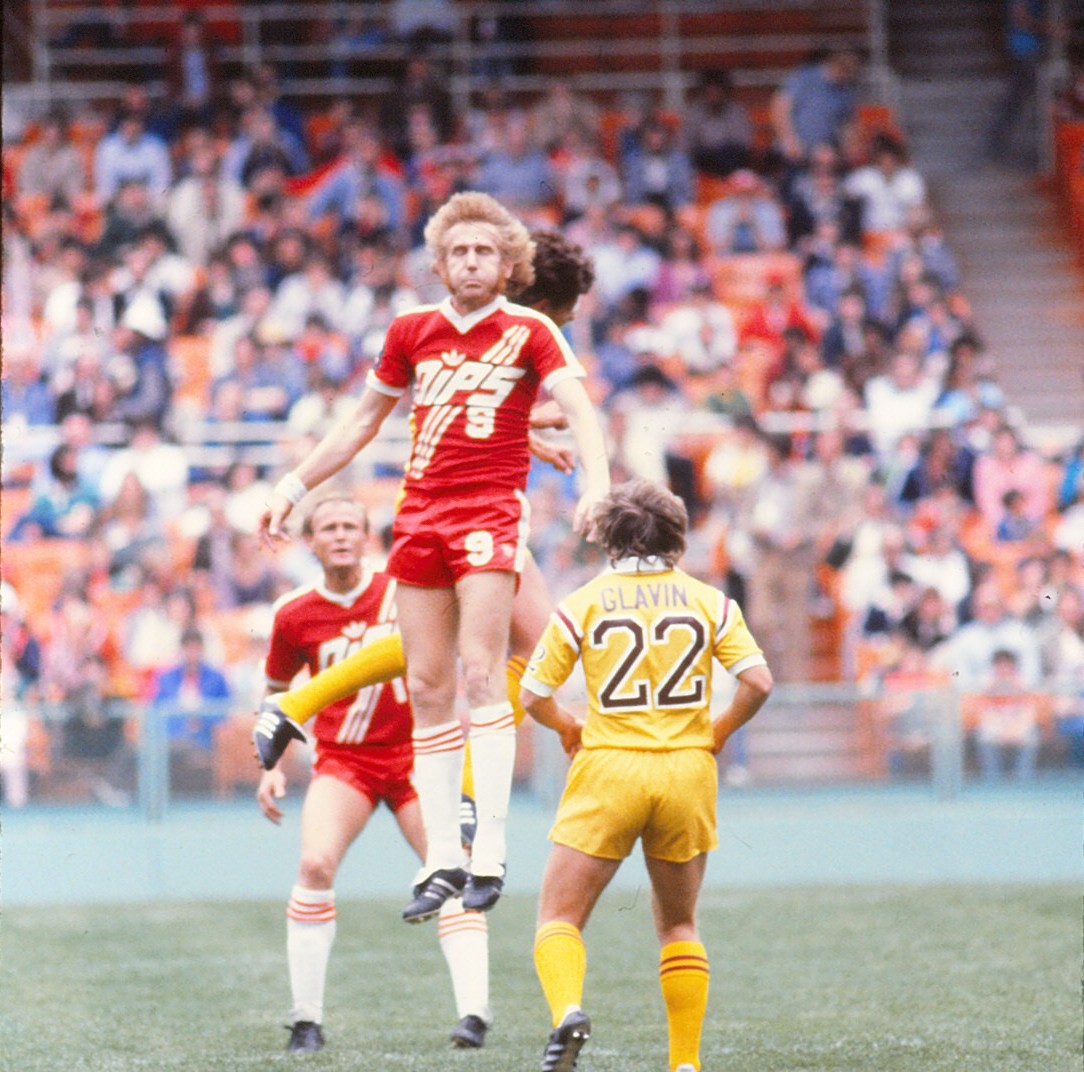 The Washington Diplomats sported bright red uniforms emblazoned with the abbreviated team name, "Dips." (Source: nasljerseys.com)
Today, soccer finally is a big enough deal in Washington that DC council is considering a proposed $119 million deal to acquire land at Buzzard Point for a stadium for DC United, the district's team in Major League Soccer. The franchise has been playing since 1996 at antiquated RFK Stadium, which will turn 43 years old in the fall. But RFK always will have a storied place in local soccer history. In addition to serving as one of the host sites for the 1994 FIFA World Cup, it also was the home of a string of teams from the 1960s through the 1980s — forgotten names such as the Whips, the Darts, the Washington Diplomats, and Team America — who unsuccessfully tried to establish the sport here.

Of those ill-fated franchises, the most long-lived was the original Washington Diplomats, who played in the now-defunct North American Soccer League from 1974 to 1980. A paper on Washington soccer by sports historians Charles Parrish and John Nauright lays out the story.

In May 1974, the Diplomats debuted at RFK against the NASL champion Philadelphia Atoms. For some reason, the stadium management chose to open only three ticket windows, so that more than 1,000 of the 10,000 fans who showed up were still stuck in line outside when District Mayor Walter E. Washington ceremonially kicked off the game. Whether it was that debacle or the beating that the visitors administered to Washington's new team, attendance sagged and the team averaged just 5,000 fans per game for the rest of the season, despite marketing gimmicks such as inviting local celebrities to participate in halftime penalty shootouts.

The following season, the franchise was confronted by an even bigger problem. A few weeks prior to its first home match, the Diplomats were informed that the newly-installed turf at RFK wouldn't be ready for play. The home opener and first two home games had to be moved to W.T. Woodson High School's football field in Fairfax. To team officials' shock, attendance suddenly surged, with all three games attracting more than 10,000 fans apiece. People from the Virgina suburbs, where there were well-established youth leagues and school teams, were a huge potential fan base. The team quickly moved most of its schedule to Woodson. That helped jump-start the Diplomats, and by the time the team moved its final five games back to RFK, the fans followed. In one of those games, 35,630 showed up to watch Brazilan superstar Pele led the New York Cosmos to a 9-2 victory over the Diplomats.

But whatever momentum the team developed was short-lived. In 1976, the Diplomats again went back to Fairfax, but the novelty apparently had worn off, because attendance dropped down to less than 6,000 per game, and players started grumbling about playing at a less-than-major league facility. The team finished 14-10 and qualified for the league playoffs as a wild card. The following season, the team moved back to RFK, got spiffy new uniforms emblazoned with "DIPS" and marketed the team's cheerleaders, the Honey Dips, as an attraction. But with a losing 10-14 record, fans stayed away.

In 1978, out-of-town owners, the Madison Square Garden group, accquired a controlling stake for a reported $1.5 million. The following year, they gambled by acquiring Dutch superstar Johan Cruyff from the Los Angeles Aztecs. Cruyff's three-year, $2.5 million contract was more than the team's entire purchase price. The next season, the Diplomats amassed a 19-11 record and drew an unprecedented 53,351 fans to a critical match against the Cosmos — only to see the team lose after having two goals nullified by the officials and Cruyff ejected. The following year, with Cruyff frequently injured and hinting that he wanted to play elsewhere, the team slipped to 17-15. The new owners decided to cut their losses, and without new investors to take over, the league was forced to drop the franchise.

But the sorry saga of the Diplomats wasn't quite over. In 1981, the owners of another franchise, the Detroit Express, decided to move their entire team to Washington and take the name Diplomats. That team lasted just one season. From 1987 to 1990, a team mostly composed of players borrowed from Club España represented Washington as the Diplomats, first as an independent team, and then in the short-lived American Professional Soccer League.

If you're interested in more trivia about the Diplomats' history and some great pictures of the team in action, check out this blog.