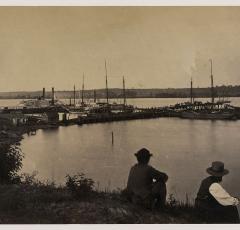 If you thought pirates were the only ones able to get into trouble on the water, you’d be wrong. At the turn of the twentieth century, the Potomac River was full of boats — or arks as they were called — that provided all sorts of illicit temptations for parties that were so inclined. While efforts were made to enforce the laws of Virginia, Maryland and the District, the arks’ ability to float downriver to avoid authorities made them a persistent problem.

Not to cast any doubt on the virtue of our historical statesman, but for the latter half of the 1800s, at least two major red light districts were right in the center of D.C., even “within sight of the White House.”

One of the most notorious of these was Hooker’s Division, on the west end of the federal triangle and right on the National Mall. With the White House to the north, the Capital to the east, and the business district within walking distance, it was pretty perfectly positioned.  The area got its name during the Civil War, when Union General Hooker moved everything seedy in the capital to a choice few spots. The name also at least partially arose from how often Hooker’s men visited the district (hint: a lot). The Evening Star had this to say of Hooker’s Division in 1863:

There are at present, more houses of this character [ill-repute], by ten times, in the city than have ever existed here before, and loose characters can now be counted by the thousands.