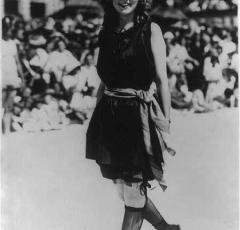 Most 16-year-old girls dream of being popular. And while some can claim to be the queen bees of their high schools, not many can maintain that they are the most popular girl in the country. In 1921, though, Margaret Gorman could. Fresh out of her junior year at Western High School (later the Duke Ellington School of the Arts) in Georgetown, Margaret went from being a regular teenager to the best-known girl in the nation when Atlantic City judges crowned her the first Miss America. 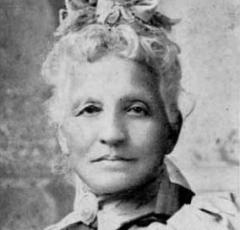 In 1867, Mary Todd Lincoln became embroiled in the “old clothes” scandal. But this story isn’t about Mrs. Lincoln; it’s about one of her associates, dressmaker to the stars, Elizabeth Keckley.

Keckley was born a slave in Virginia around 1820. Her earliest duty was to watch after the baby of the white family; she was beaten severely for making mistakes. Following the sexual abuse of her mother, which led to Keckley’s birth, Keckley herself was sexually assaulted.

In addition, she was loaned out to a family in St. Louis who used the income she brought in from dressmaking to support themselves.  From her autobiography:

With my needle, I kept bread in the mouths of seventeen persons for two years and five months.

In 1860, Keckley was able to buy her freedom with the sum of $12,000. Her clients, the well-to-do women of St. Louis had heard of her struggles to raise the money and passed the hat between themselves to provide the amount.

Keckley moved to D.C. to set up shop and teach young colored women in her trade. Here she confronted the laws obstructing the movement of freed people in the capital. Unless she could obtain a license to stay in the capital (which required money) and have someone vouch that she was free, Keckley would have to leave. Here again the lady clients of Keckley came to her aid.

Shortly after her arrival in Washington, Keckley entered the employ of Mrs. Jefferson Davis, though she still made dresses for other women of the city, like Mrs. Robert E. Lee.

Keckley’s time with Mary Todd Lincoln, however, is particularly noted by historians, who use Keckley's book to draw conclusions about the First family’s private life.

Women’s fashion is a complicated subject, but one doesn’t usually think of it as deadly. However, the fatal dance between health and beauty was a reality for Washington women in the 19th century.