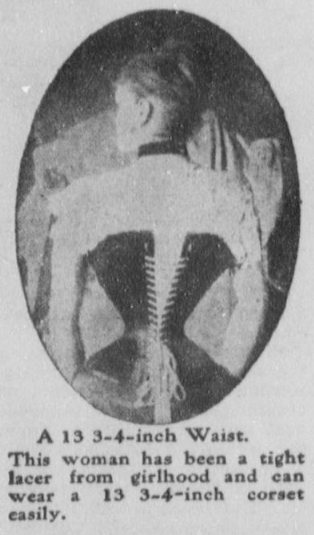 Ow. Just, ow. (Photo source: The Washington Herald, June 27, 1909)
Women’s fashion is a complicated subject, but one doesn’t usually think of it as deadly. However, the fatal dance between health and beauty was a reality for Washington women in the 19th century.

An 1888 article in the Evening Star details what many still thought to be the good effects of a tightly laced corset:

Scientists have found that a good deal of the blood stored uselessly in the abdominal veins is, by slight pressure, placed advantageously at the disposal of the muscles, brain and skin. This explains how men, as well as women, instinctively employ some method of abdominal compression [during physical activity]. …During hours of exertion, reasonable tight lacing is fitted to increase mental and physical activity.

Luckily for District women (and men, too, apparently!), other scientists began recognize the deformity of a wasp waist. As the National Tribune reported, Frederick Treves lectured on the topic in 1882.

There is a popular delusion to the effect that there is plenty of empty space inside the body, and into this space the displaced organs are pushed in tight lacing. Tight lacing means a depression not of skin, muscle, and bone, but of liver stomach and lungs. Even a slight amount of constriction affects these organs, and stays that are no means tight lessen the capacity of the chest for air. Post mortems on tight lacers show the liver deeply indented with the ribs and more or less seriously displaced. The stomach is also commonly affected, as, too, are the lungs.

Mr. Treves also had quite a bit to say on possible diseases and ailments that result from tight lacing, including chronic dyspepsia, liver derangements, disturbances of nutrition, a useless diaphragm, severely weakened back muscles, and an interrupted circulatory system. Ouch.

Besides obvious medical failings, tight lacing was attacked as barbaric practice that tormented young girls. The cruelty that could be afflicted for want of a tiny waist was described as follows, from an 1893 article in the Evening Star.

A corset of great strength and rigidity was fastened about her body and laced to the utmost possible point of constriction. This she was obliged to wear at night as well as in the daytime, the instrument of torture being fastened behind in such a manner that she could not remove it… Furthermore, during her waking hours a board was strapped flat against the back of her waist and shoulders, extending up the back of the neck, where a steel ring covered with leather encircled her throat [to prevent stooping].

Apparently in addition to all that, a few straps and some bars of steel could be attached to a poor girl to keep her shoulders back.

By the turn of the century, most Washington women came to recognize tight laced corsets as “implements of torture” that they were and gave up the practice. Thank goodness for science.

It seems that this “curse to womanhood” fell into disfavor largely because it just wasn’t in style anymore. You see, Washington women in the early 1900’s were very interested in Parisian fashion. The Evening Star carried a regular column about it and extreme weight was given to the French madams of style. In this article from 1907 entitled “The Last Word From The Most Reliable Parisian Ateliers,” it was firmly established that “whatever may be said to the contrary, tight lacing is not indulged in by the woman of fashion.” So tight lacing was definitely out and by the 1920’s, it was outer than out. Never again would the suppression of internal organs by “straightjackets” of metal and fabric be widely accepted by women in this area.

Here’s hoping that this deadly fad never comes back – here or in Paris.

Symes, Mrs. Henry. “How to be Healthy and Beautiful: Health and how it is affected by the Corset.” The Washington Herald. 12 April 1908. Chronicling America: Historic American Newspapers. Lib. of Congress. Web. 2013.