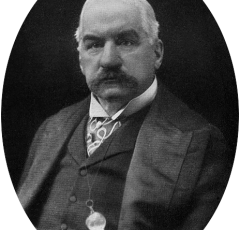 J.P. Morgan was a New York banker but he had plenty of occasions to visit Washington. When you control as much money as he did, you tend to keep a close eye on the government – and vice versa. And so, it’s no surprise that Morgan came to the nation’s capital from time to time for discussions with the powers that be.

Given that he was a pretty important fellow with a busy schedule, it’s also no surprise that Morgan didn’t want to waste a lot of time in transit between D.C. and the Big Apple. After all, he had deals to strike, businesses to reorganize and railroads to consolidate amongst other items on his “to-do” list.

And so, on January 23, 1911, Morgan took it upon himself to set a new world record for rail travel between Washington and New York.