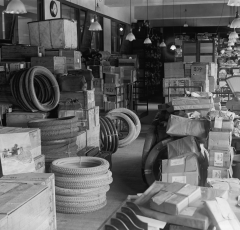 In Herman Melville's classic 1853 short story, "Bartleby the Scrivener," the narrator offers a curious explanation for the self-destructive melancholy of the main character.

The report was this: that Bartleby had been a subordinate clerk in the Dead Letter Office at Washington, from which he had been suddenly removed by a change in the administration. When I think over this rumor, I cannot adequately express the emotions which seize me. Dead letters! does it not sound like dead men?

The "Dead Letter Office at Washington" might sound like a clever literary invention, but as it turns out, there actually once was such an institution, which existed to process mail that was either mis-addressed or undeliverable for a variety of other reasons. According to the official history of the U.S. Postal Service, the Continental Congress actually authorized appointment of an inspector of dead letters back in 1777, and there was a central office in the District at least as far back as 1830, according to an article by Wesleyan University historian Courtney Fullilove, who found a box of records in the National Archives that still contained four undelivered letters from 1889.

The holiday season is pretty busy for the United States Post Office -- lots of letters and packages going all over the country, from coast to coast. And we're all familiar with the warnings that tell us to mail our items early if we want to guarantee delivery by Christmas. Well, apparently D.C. residents weren't heeding the warnings back in 1921. So the U.S.P.S. called in the big fella to get the point across.