In Herman Melville's classic 1853 short story, "Bartleby the Scrivener," the narrator offers a curious explanation for the self-destructive melancholy of the main character.

The report was this: that Bartleby had been a subordinate clerk in the Dead Letter Ofﬁce at Washington, from which he had been suddenly removed by a change in the administration. When I think over this rumor, I cannot adequately express the emotions which seize me. Dead letters! does it not sound like dead men? Conceive a man by nature and misfortune prone to a pallid hopelessness, can any business seem more ﬁtted to heighten it than that of continually handling these dead letters, and assorting them for the ﬂames? For by the cart-load they are annually burned. Sometimes from out the folded paper the pale clerk takes a ring:—the ﬁnger it was meant for, perhaps, moulders in the grave; a bank-note sent in swiftest charity:—he whom it would relieve, nor eats nor hungers any more; pardon for those who died despairing; hope for those who died unhoping; good tidings for those who died stiﬂed by unrelieved calamities. On errands of life, these letters speed to death.
The "Dead Letter Office at Washington" might sound like a clever literary invention, but as it turns out, there actually once was such an institution, which existed to process mail that was either mis-addressed or undeliverable for a variety of other reasons. According to the official history of the U.S. Postal Service, the Continental Congress actually authorized appointment of an inspector of dead letters back in 1777, and there was a central office in the District at least as far back as 1830, according to an article by Wesleyan University historian Courtney Fullilove, who found a box of records in the National Archives that still contained four undelivered letters from 1889. 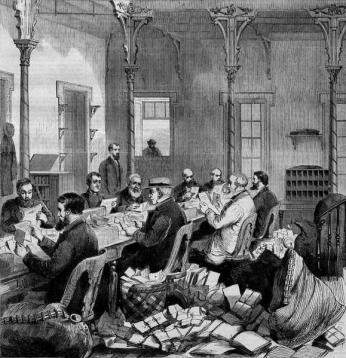 According to the National Postal Museum, by the late 1800s, Washington's dead-letter clerks, who worked out of the old Post Office Department Headquarters on Pennsylvania Avenue and 11th Street NW,  were confronted with up to 23,000 pieces of "dead mail" each day. In an era when the U.S. was experiencing a vast wave of immigration, many of the letters were from foreigners who were trying to reach relatives or friends in the new country, but were handicapped by a lack of a proper address for them, and sometimes by a lack of knowledge of U.S. geography. One letter-writer, for example, addressed a letter to her son with "Mr. James Gun, Power-Loom Suttle Maker, Mass., America." But the clerks--some of whom were basically skilled self-taught detectives and puzzle-solvers--somehow tracked down a James Gunn who lived at 4 Barrington Street in Lowell, Mass., and delivered the message to him. In another instance, they pondered a letter containing a check for $1,000, addressed to "Dr. Washburn, Roberts College." Though there was no institution in the U.S. by that name, the clerks discovered one in Istanbul, Turkey, and forwarded the letter and money to Washburn there. In that fashion, they were able to locate the correct destination for about 40 percent of the "dead letters" they received. 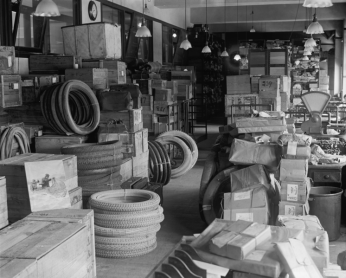 By 1921, when a Washington Post feature writer visited the office, it had been relocated to the third floor of the National Capitol Post Office on Massachusetts Avenue NE, near Union Station. The office could boast that each year, it managed to get more than four million letters to their proper domestic recipients, and another 500,000 to recipients in foreign countries. Another 13.3 million letters, whose intended recipients could not identified, were recycled as pulp paper.
In addition to innocuous pieces of mail, the office's 53 clerks also opened packages to discover a variety of bizarre and sometimes dangerous items, ranging from a hay-mowing machine and "pistol-penknives guaranteed to shoot or carve" to the cremated remains of a Japanese prince. And they were continually on guard for snakes and explosives.  A Washington guide book from that period lists other items, including a human skull, a tarantula, a Native American scalp, and something called a "safety squib rocket."
By the 1920s, the volume of undeliverable mail was such that the main Dead Letter Office in Washington had spawned satellite branches in Chicago, New York and San Francisco. Over time, the Washington office lessened in importance. When Post reporter Daniel S. Greenberg visited the office in 1959, it was just one of 15 regional offices across the nation, and its staff had shrunk to a nine-person crew who handled about 1.2 million pieces of mail. The office still still operated in the 1970s, when the Post published a profile of a Dead Letter Office clerk named Milton Nachamson, who sorted undeliverable letters and passed them along to other clerks who slit them open to search for clues about the intended recipients in "a little suite of rooms down a dark green corridor somewhere in the bowels of the main Post Office building." By the early 1980s, according to Post articles, the Washington Dead Letter Office itself finally was dead, with the regional operation shifted to Philadelphia.

How a Maryland Crime Shaped a Presidential Election

No Bridge for Three Sisters