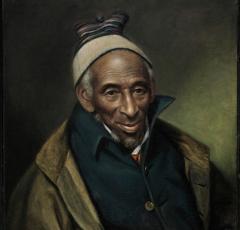 Yarrow Mamout was the most prominent African American in early Washington.  He was a Muslim, educated in West Africa to read and write in Arabic.  He and a sister arrived in America from on a slave ship in 1752. After forty-five years as a slave of the Beall family of Maryland, Yarrow (his last name) gained his freedom and settled in Georgetown. In 1800, he acquired the property at what is now 3324 Dent Place and lived there the rest of his life.

The house on Yarrow Mamout’s old lot in Georgetown was scheduled for demolition in 2012, but efforts were made to save any artifacts from his occupancy as well as his mortal remains from the bulldozer.

The Deal Done in the Dark

When D.C. Faced a Typhoid Epidemic