For those of us who are nostalgic or liked to play with model trains when we were kids, today marks a rather inauspicious anniversary. Fifty-two years ago, on January 28, 1962, Washington's original streetcar system road the rails for the final time. That last run ended 99 and a half years of service to the nation's capital as buses replaced the trolleys as the primary means of mass transit in the District. So, how did we get to that point?

After going electric in the last decade of the 19th century, the streetcars quickly became a crucial part of transportation in the nation's capital, just as they were in other cities across the country. But Washington's system — which gradually coalesced from a hodgepodge of small companies into a single entity, the sprawling Capital Transit Co. in 1933 — faced special problems. 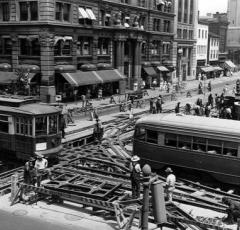 Many U.S. cities — including Washington — are now looking again to a late 19th-century transportation technology, the electric streetcar, as a tool to help revitalize business and entertainment districts and attract young professionals and empty-nesters to consider urban living. Here in DC, the District Department of Transportation says it is in the finishing stages of completing a new line along H Street and Benning Road NE, which eventually will form part of a new DC Streetcar system with eight lines and 37 miles of track, which will serve all of the District's eight wards.

That makes it a good time to look back at the history of Washington's once-grand system of electric streetcars.