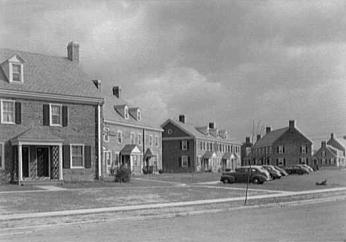 The year is 1943. You’re new to the area and looking for a place to live that’s close enough to the city that the commute to your government job won’t be completely terrible. Maybe you’ve got a dog. Maybe you’re starting a family. It’s a busy time. The war is going on, after all, and Washington is buzzing with activity. Where are you going to live?

Well, if you were looking in Arlington, there’s a good chance you might end up in the new Fairlington neighborhood…  That is of course, if you could get a spot -– easier said than done in those days.

While the D.C. area had seen a surge in building projects, including a number of FHA apartment complexes, under the New Deal policies of the 1930s, Washington struggled to accommodate the thousands of new government workers who flocked to the area during World War II. In an effort to ease the housing crunch, President Roosevelt ordered the creation of the Defense Homes Corporation in 1940, to acquire land and build housing for defense workers in the Washington area and in other areas around the country with extensive defense related activities.[1]

The Feds soon set their sights the wooded hills a couple of miles south of the Pentagon. By the spring of 1942, the government had acquired 322 acres in (then) Fairfax and Arlington counties and was moving ahead with a large apartment complex they called… wait for it… Fairlington. Inventive, huh? (Actually, the original name for the community was “Seminary Heights,” but that label was axed after local citizens complained that the name was too similar to other nearby sites, including the Episcopal Seminary and Seminary Road.)[2]

These developments did not sit well with some in the local community. As a 1941 editorial in The Sun complained:

Arlington County, watching the Federal Government nibble at its land, is in the position of the little fellow who loses his candy to the big bully—nothing much can be done about it.... Indignant as we may become over the situation...we don't have much hope of stopping the Federal Government from buying any land that it wants in Arlington County.[3] 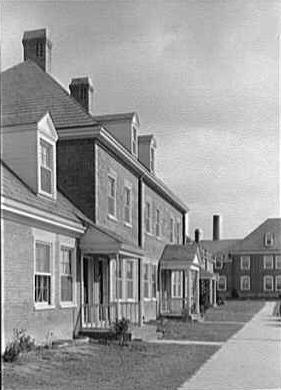 Skeptics worried that the county would suffer from lost tax revenue and that the wartime boom of cheap housing construction would create slums or “ghost towns” in Arlington after the war was over.[4] But, despite these concerns, the project pushed forward.

The architects chosen to design the project, Kenneth Franzheim and Alan Mills, opted for a Colonial Revival style and built 3,439 garden style units between 1942 and 1944, which made Fairlington the largest apartment complex in the nation at the time it was built.[5] It was also very much in demand, especially for young families with kids.

Children at Fairlington? The place swarms with them. There are tot lots, baseball diamonds, tennis courts, playgrounds and outdoor sprinklers for hot summer days. Even their majesties, the babies, are not forgotten. There are washing machines and dryers in the cellars of the buildings, vital equipment to any place which houses a baby buggy.[6]

To control demand, the National Housing Agency developed strict qualifications for residency. Applicants must have come to D.C. area from elsewhere within 12 months of signing the lease, and must be employed by agencies which were rated as having high importance to the war effort according the classification list developed by the Bureau of the Budget.[7] Rent ranged from $58.50 per month for a one bedroom unit to $89.50 for a three bedroom place.[8] (Needless to say, rent has gone up a few bucks since 1943.)

What set Fairlington apart from many other wartime housing projects was that it was intended to be a permanent development from the beginning, not just the low cost, low quality project, that some in the local community feared. The DHC planned to sell the complex as soon as possible after the war and recoup the Government’s investment. As a result, Franzheim and Mills built the neighborhood to last. Despite wartime shortages on high quality materials, they succeeded in building a very sturdy garden style complex that would, indeed, stand the test of time.

True to plan, the Government sold Fairlington to private investors in 1947.[9] In the 1970s, the community was converted from apartments to condominiums and it remains one of Arlington’s most sought after neighborhoods today. Its unique history qualified it for historic preservation status and it was added to the National Register of Historic Places on March 29, 1999.