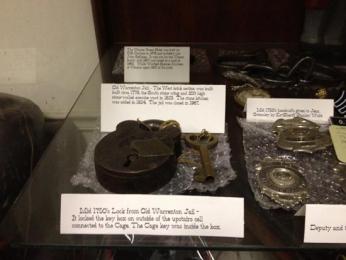 A few days ago, the headlight on my car decided to give out. Having swapped out the other bulb a few months back, I was dreading the prospect of doing it again and the bloody knuckles that would almost certainly result. (No one would ever confuse me with Mr. Goodwrench. But, in my defense, is there any good reason why a car would be designed so that you have to detach the inner fender in order to change a light bulb? Thanks, Honda.)

In a moment of weakness, I decided the best tool for the job was my wallet. And so, on my way to work this morning, I pulled into Joe's Service Center in Warrenton, Virginia where I had been visiting my folks for Christmas. The receptionists, Kathy and Kelly, said Joe could squeeze me in if I waited for a few minutes, so I handed over the keys.

As I took a seat, I noticed that this was no ordinary service station waiting room. Yes, there was the requisite television and car-related stuff on the walls. But there were also two large cases of historic objects and several photo albums full of old-timey Warrenton pictures.

I returned to the desk to inquire about the cases. Kathy informed me that the shop's owner, Joe Grimsley, was a lifelong resident of Warrenton with a very interesting family history, and she was an auctioneer who had helped put together and document the collection.

Joe's father, Turner Grimsley, had been a police officer in the Town of Warrenton beginning in the 1930s. When the Vint Hill army post opened during World War II, housing in the area became scarce. In July 1944, Turner was offered the position of deputy sheriff and country jailer. As part of the deal, he and his family, which by that point included a wife, Jean, and two sons, Joe and Gene, would have housing and board at the historic jail in the center of town, built in 1808. (This structure replaced the town's original jail, which had been built in the mid 1700s.) Turner quickly accepted the offer and the family moved in to the jail a few weeks later.

As part of the agreement, Jean Grimsley cooked meals for the prisoners. When it was time to eat, Turner would carry the food inside the cellblock while Jean waited outside, armed with a gun in case anyone tried to escape or assault her husband. Jean also looked after the jail when Turner was out walking his beat and convinced the town to install a telephone outside the courthouse so that she could contact him if the prisoners acted up while he was out patrolling. Joe and Gene watched the action through windows on the first floor.

The Grimsleys unique living arrangement lasted until 1954 when Turner took another job.

A few years later, the county announced plans to demolish the old jail and move prisoners to a new building being constructed a few blocks away. Local citizens rallied to save the structure, which is the oldest public building in Fauquier County, and convinced the county to preserve it. Today the Fauquier Historical Society has its headquarters in the building and operates the Old Jail Museum, giving visitors a glimpse of what prison life was like during the 1800s.

It's definitely worth a visit. But, as we know, it isn't the only history museum in town. Just ask Joe Grimsley.