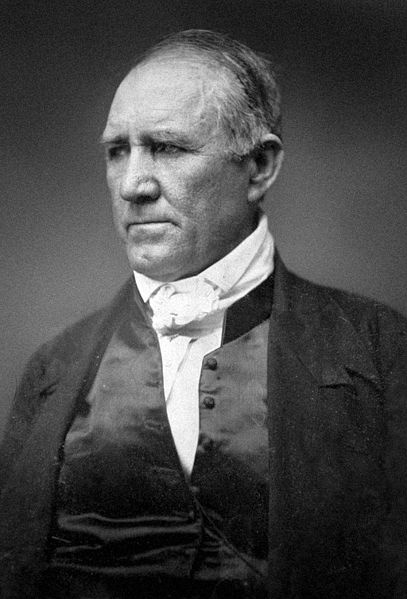 Think animosity between Republicans and Democrats is bad now? On April 13, 1832 Sam Houston, a former Congressmen and Governor of Tennessee, beat a member of Congress with a wooden cane on Pennsylvania Avenue. (Photo source: Wikipedia)
The well publicized incident between Rep. John Boehner and Sen. Harry Reid during the Fiscal Cliff negotiations was big news but it was hardly D.C.'s biggest dust up between politicos.

Let's turn back the clock to April 13, 1832. That evening, Congressman William Stanbery left his abode at Mrs. Queen's boarding house and went out for a walk along Pennsylvania Avenue. As he was crossing the street, he encountered Sam Houston -- a former Congressman from Tennessee -- and two members of the U.S. Senate who were on their way to the theater.

A harsh critic of President Jackson, Stanbery had recently lambasted the administration's Indian policy on the House floor and suggested that Houston had worked with government agents in defrauding Cherokee Indians while he was the Governor of Tennessee. Houston had not taken kindly to the accusations. He had demanded an apology and made overtures about a duel, both of which Stanbery ignored.

But, it was hard for the Ohioan to ignore Houston as they stood face-to-face on the street... especially when the swinging started.

Still steaming from the Indian policy speech a few days before, Houston purportedly yelled, "Damned rascal!" and began beating the much-smaller Stanbery with his wooden cane. In defense, Stanbery pulled a gun from his pocket. However, the weapon misfired and only served to further enrage Houston and incite more blows with the cane. When the bludgeoning finally ended, Houston continued to the theater and Stanbery staggered back to his room at Mrs. Queen's.

The incident sent shock waves through the city and up Capitol Hill. Congress ordered that Houston be arrested and tried. Despite the best efforts of his lawyer, Francis Scott Key (yes, THAT Francis Scott Key), Houston was found guilty of Contempt of Congress. Still, the incident proved to be mostly a win for the former Tennessean. Because of his political connections, he was reprimanded but not censured. In other words, he got off easy.