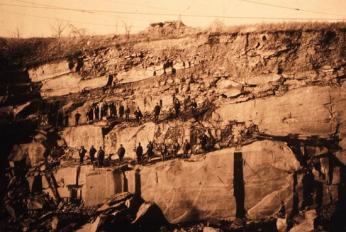 We're happy to have a guest post from local historian and friend of the blog, Garrett Peck who is the author of  The Smithsonian Castle and the Seneca Quarry, released from The History Press. This book tells the story of a (until recently!) largely-forgotten quarry in Seneca, Maryland, which provided the stone for the Smithsonian Castle and a host of other local landmarks. As Peck explains, the quarry also proved to be a source of scandal for President U.S. Grant in the 1870s.
Want to learn more? Pick up a copy of the book.
In 1879, the two-year old Washington Post rolled out a litany of complaints against the rumor that former President Ulysses S. Grant would seek a third term. The article was called "Symptoms of Grantism," a name that implied corruption. 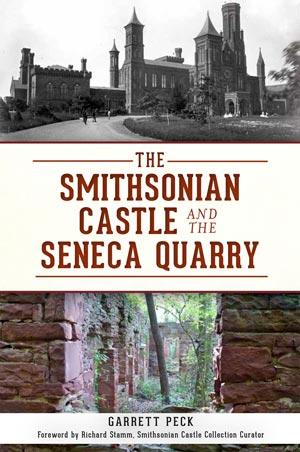 "General Grant may be the next president, and then the good old days will come again - the good old days of Credit Mobilier, Pomeroy, Paterson, Colax and Oaks Ames; the fine old days of Belknap, Orvil Grant and Indian posts bought and sold; of whiskey rings and Joyce, Avery, McKee and Babcock; of Seneca sandstone quarries and St. Domingo commissions," then continued on and on with a lengthy list of controversies and scandals that plagued Grant's first two terms. It concluded, "Dost like the picture?"
For the past year I've been researching a history of the Seneca quarry, the Montgomery County, MD quarry that provided the distinctly rusty red sandstone for the Smithsonian Castle and hundreds of buildings around the Baltimore and Washington area. This phrase that appeared in the Post was the first clue to a forgotten episode in American history, one that made national headlines in its day, but one that was soon forgotten. None of Grant's biographers covered what The Baltimore Sun called the "Seneca stone ring." I pieced the story together from congressional testimony, Grant's papers and newspaper articles.
The scandal was rooted in the 1866 purchase of the Seneca quarry by a number of Georgetown men, including Henry D. Cooke and John Kidwell. They organized the Seneca Sandstone Company and wanted to take advantage of the post-Civil War building boom in the nation's capital. In an early example of political influence peddling, they sold the stock to senior Republicans at half price - including to Ulysses S. Grant a year before he was elected to the presidency. That wasn't illegal then, but many accused Grant of taking a bribe when his stock ownership was revealed in early 1871 after Cooke was appointed as the first territorial governor of the District of Columbia. 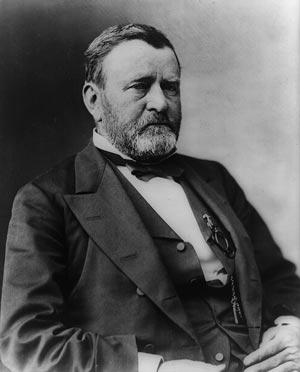 Because they had so undercapitalized the company, the quarry owners took out several mortgages - including a second, unsecured loan for $75,000 from the Freedman's Bank. The person that provided the Freedman's Bank loan was Cooke himself, who sat on the board of both the quarry and the bank. And yes, that was quite illegal, even then. Henry was the younger brother of financier Jay Cooke. When Jay Cooke & Co. defaulted in September 1873, it triggered the Panic of 1873. The subsequent economic depression took down the Seneca Sandstone Company in 1876 - and with it, the Freedman's Bank, wiping out the life savings of 400,000 former slaves and exacerbating their poverty for decades. It was like WorldCom, the housing bubble, and the Great Recession all wrapped into one corrupt bundle.
Did President Grant himself do anything wrong by owning stock in the Seneca Sandstone Company? Actually, no. He did nothing illegal, and the man himself was incorruptible. He sold his shares in the company in 1871, almost two years before the Panic of 1873. Henry Cooke, on the other hand, probably should have gone to jail. Congress investigated the Seneca stone ring and recommended that Cooke and others be brought up on charges, but no one ever was. Cooke died in February 1881 a free man.
The Seneca stone ring scandal was soon forgotten, but the quarry lingered on through bankruptcies and floods until it finally closed for good in 1901. The quarry now seems lost in the impenetrable woods along the C&O Canal. But no, not forgotten anymore.