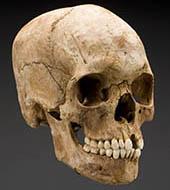 Lewis Powell, the would-be assassin of Secretary of State William H. Seward, was prone to goof-ups. You might even say he had the tendency to lose his head.

As you know from our previous post, Powell was one of the co-conspirators in the Lincoln assassination plot. After his bloody rampage in the Seward home, Powell was tried and hanged along with three other conspirators on July 7, 1865. He died on the gallows at the Washington Arsenal (present day Fort McNair) and was buried near the scaffold. That probably should’ve been the end of Powell’s earthly journey.

Except that it wasn’t.

Four years after his death, President Andrew Johnson gave the order to release the bodies of the executed criminals to their families. But, Powell’s remains went unclaimed and so the body was reinterred in Holmead Cemetery near 19th St. and Florida Ave. NW.

In the 1880s, the cemetery was slated for redevelopment and developers hired undertaker A.H. Gawler to exhume the bodies and contact relatives. Once again, Powell’s remains went unclaimed.

For his own spooky reasons, Gawler decided to hold on to Powell’s skull. (It’s unclear what he did with the rest of the body.) After several years, Gawler gave the skull to the Army Medical Museum which, in turn, gave it to the Smithsonian in 1898. Apparently this sort of donation happens a lot because the Smithsonian decided in the 1990s that its skull collection was getting out of hand and they needed someone to sort through the boxes of craniums. Anthropologist Stuart Speaker, a former Ford’s Theatre employee, was assigned this task and rediscovered Powell’s skull in 1992.

So what do you do with the skull of a failed assassin who has been dead for over 100 years?

The Smithsonian was ready to do whatever Powell’s living relatives desired, but got conflicting opinions. Helen Alderman, great-neice of Powell, wanted the remains to be buried in his native Florida. Another woman, who remained anonymous but claimed to be a descendent of Powell and one of his lovers, lobbied for the Smithsonian to keep the skull. Though Powell was apparently as well liked by women in his own time as he is now, scholars doubted whether he fathered any children and Alderman won her suit.

In 1994, Lewis Powell’s head was buried next to his mother’s grave in Geneva, Florida. One can only hope the skull has reached its final resting place.

Robinson, Jim, "Skull May Be That Of Conspirator In Lincoln Plot," Orlando Sentinel, June 2, 1992.

And for an actual picture of Lewis Powell's Skull, check out “Abraham Lincoln’s Assassination,” http://rogerjnorton.com/Lincoln25.html.