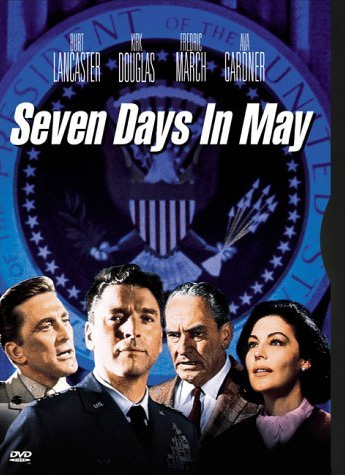 The 1964 conspiracy thriller, "Seven Days In May" was made at the behest of President Kennedy, but he didn't live to see it.
It was July 1963, and on Pennsylvania Avenue in front of the White House, a brutal melee suddenly erupted between rival groups of pickets who were on opposite sides of a proposed nuclear test-ban treaty. As Washington Post reporter Stephen C. Rogers described the scene, the protesters began "slugging, kicking and gouging" one another, until baton-wielding policemen waded into the fray to separate them. As the officers dragged the most vociferous brawlers away, a man in a bright-blue baseball cap suddenly stood up in the center of the confrontation. "All right! All right! All right!" he shouted, and the fighting abruptly stopped.

The man in the cap was Hollywood director John Frankenheimer. He was in the District to film a location scene for his Cold War thriller, Seven Days in May, about a conspiracy by Pentagon generals to overthrow a politically beleagured President who dared to try reducing tensions with the Soviets. When it was released in 1964, the movie's chilling message about the fragility of American democracy and the danger of far-Right paranoia was underscored by a real-life backstory that was just as disturbing. Frankenheimer made Seven Days in May at the personal urging of President John F. Kennedy, who'd clashed with an Army general with extremist views early in his administration, and apparently feared such a cabal really was possible. Sadly, JFK did not live to see the film he helped bring to the screen.

JFK's connection with the film  began in the summer of 1962, when syndicated columnist Fletcher Knebel sent the President an advance copy of a novel, Seven Days in May, that he'd co-authored with fellow journalist Charles W. Bailey, Jr. Knebel had been inspired to write the book after he did an interview with U.S. Air Force Gen. Curtis LeMay, in which the military officer went off the record to castigate JFK as cowardly in his handling of the Bay of Pigs crisis. From that thread, Knebel and Bailey spun a tale of a right-wing military coup. It was a storyline that apparently resonated with JFK. In 1961, his Secretary of Defense, Robert McNamara, even had been compelled to fire U.S Army Gen. Edwin Walker from his command in Europe after it was revealed that Walker had been indoctrinating troops with literature from the John Birch Society, which viewed both JFK and his predecessor Dwight D. Eisenhower as closet communist agents. The President was all too aware of a fringe that shared similar views, especially after Walker showed up in Mississippi to rally white bigots to oppose James Meredith's enrollmen at the University of Mississippi. As Attorney General Robert Kennedy told White House aide Ted Sorenson, Walker was "getting them all stirred up. If he has them march down there with guns, we could have a hell of a battle."

JFK quickly read the book and then shared it with his brother, as well as members of their inner circle. While JFK thought it was marred by "awful amateurish dialogue" and that the President was drawn too vaguely, the character of treasonous Gen. Scott made a strong impression upon him.  JFK took it upon himself to ensure that a hit movie was made of the book, as a preemptive strike against his extremist enemies. As JFK aide Pierre Salinger later told journalist and author David Talbot, "Kennedy wanted Seven Days in May to be made as a warning to the generals. The President said, 'The first thing I'm going to tell my successor is, 'Don't trust the military men--even on military matters.'"

JFK already had plenty of links to the movie business. His father, Joseph Kennedy, has been a movie producer and RKO studio chief in the 1920s and 1930s, and JFK himself socialized with Hollywood luminaries such as Marilyn Monroe (whom many over the years have have depicted as a Kennedy mistress, without conclusive proof). And the President himself already had provided subject material for the silver screen. His father had orchestrated the making of PT 109, a 1963 Warner Bros. biopic based upon JFK's experiences during World War II, to give a promotional boost to JFK's 1964 reelection campaign. According to a 2013 Variety article, the President himself communicated--though Robert Donovan, the journalist who'd written the book upon which the movie was based--that he wanted Warren Beatty to portray him, though he later approved the choice of Cliff Robertson.

But JFK reportedly took an even more direct role in Seven Days in May. According to Talbot's book Brothers: The Hidden History of the Kennedy Years, the President contacted director John Frankenheimer, who had made another film based upon one of the President's favorite thrillers, Richard Condon's 1959 novel The Manchurian Candidate.  JFK actually provided behind-the-scenes help to that movie as well; When United Artist had wavered in its support of the project, fearing that it might increase Cold War tensions,  JFK had done a favor for friend Frank Sinatra and communicated to the studio that he approved of the picture being made. In August 1962, he even arranged a private screening at the White House.

"President Kennedy wanted Seven Days in May made," Frankenheimer recalled years later to Talbot. "Pierre Salinger conveyed this to us."

JFK even offered that when Frankenheimer wanted to shoot the demonstration scene outside the White House, he would go to the Kennedy family vacation home in Hyannis Port for the weekend, to eliminate any security obstacles.

JFK's seal of approval to the project also helped attract what Talbot calls "an A-list of Hollywood liberals" to the project. Kirk Douglas' production company bought the rights to the book, and the actor agreed to star in the film, along with Burt Lancaster and Frederic March. But even so, Frankenheimer ran into trouble with the Department of Defense, because he declined to submit the script by Rod Serling to officials in advance for "consideration," as the censorship process was called. (That probably was a wise move on Frankenheimer's part, since It's hard to imagine that  would have green-lighted a production in which generals were the villains.) Without permission to film at the Pentagon, he augmented the scenes shot at Paramount Studios with a lone location shot that he filmed surreptitiously. "We had the camera in the back of a station wagon with a black cloth over it," the director explained in a book by film historian Gerald Pratley. Douglas, wearing his Marine colonel's uniform, and drove up and parked his car, and then walked into the Pentagon. As he did, three actual officers saluted him, thinking he was a real superior. Before the ruse was discovered, Douglas then turned around and walked out, and drove away. "This gave us entrance and exit shots," Frankenheimer said. "We were gone in about five minutes.

In the the fall of 1963, after the filming was completed but the film had not been released Seven Days in May  started to appear eerily prescient. In late October, Gen. Walker--the officer who'd been forced out of his command by his extremist views--gave an anti-Kennedy speech and then instigated a mob of rioters to disrupt an appearance in Dallas by United Nations ambassador Adlai Stevenson. As journalists Bill Minutaglio and Steven L. Davis recounted in their book Dallas 1963, protesters burst into the aisles, holding American flags upside down, as one man chanted loudly, "Kennedy will get his reward in hell. Stevenson is going to die." The ambassador himself was assaulted by a protester who struck him on the head with a placard.  It was a brawl eerily similar to the one in the movie.

But about a month later, on November 22, Paramount Pictures decided to pull a planned ad for the film, which featured a line uttered by one of the fictional plotters: "Impeach him, hell. There are better ways of getting rid of him," out of fears it would be too provocative. That move spared the studio what Variety later noted would have been "an embarrassing coincidence on the very day the President was shot."