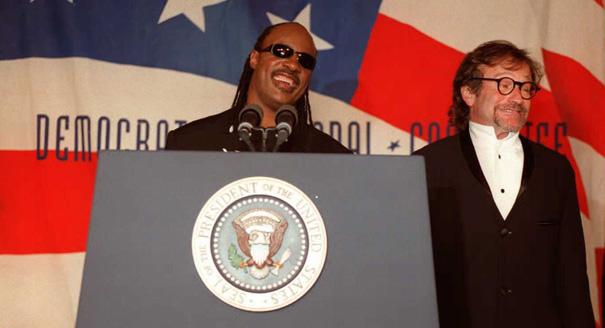 Robin Williams and Steve Wonder performed at a Democratic Party fundraiser in Washington on May 8, 1996. The previous night Williams surprised the audience at the D.C. Improv when he showed up and got on stage. (Source: Getty)

As the world mourns the passing of actor-comedian Robin Williams, we thought we'd turn back the clock to happier times.

In May of 1996, the Democratic National Committee invited Williams to D.C. to perform at a party fundraiser at the old Washington Convention Center. The event was scheduled for Wednesday, May 8, but Mork came to town a day early. After dinner with Vice President Gore, the comedian made his way over to the D.C. Improv on Connecticut Ave. where he surprised the audience -- and perhaps the previously scheduled acts -- with a late-night stand up routine. As would-be headliner Tom Kenny said jokingly, movie star Williams "got off his big bag of money" to swing by the club and get some attention from a real, live audience.

Mrs. Doubtfire (no, he didn't actually dress up that night) started his set by asking the audience for tourist advice. He then moved on to a host of other topics including the Unabomber web site, the "Brady Bill Bunch" and what it's like raising children when you moonlight as a cross dressing nanny. By the time he finished, it was well after midnight and he'd joked his way through four bottles of water.

The next night at the black tie gala, Williams gave a rousing 20 minute performance before the President, First Lady and 3,000 celebrants who paid $2,000 a head. Check out the CSPAN video below for the full performance.

Rest in peace, Robin Williams. You will be missed.