On April 28, 1909, a funeral procession nearly a mile long paraded down Pennsylvania Avenue and M Street, complete with fine carriages and a military escort. Throughout Washington, D.C., flags were displayed at half mast, spectators lined the streets, and school children were allowed a break from their studies to glimpse out the window and see it pass by. The man they were there to honor was Major Pierre Charles L’Enfant… who died in 1825. 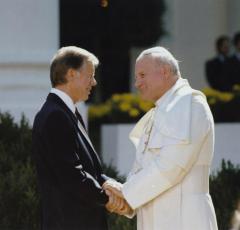 Streets are being shut down... Huge crowds are expected to overwhelm the city's Metro system... There are security concerns... For longtime Washingtonians, the excitement over Pope Francis's inaugural visit is like turning back the clock. 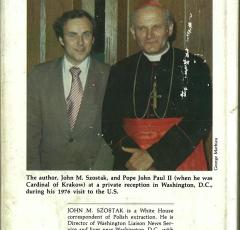 Every house has a history but few can say that they were blessed by the Pope – especially here in America. There is, however, one Alexandria, Virginia condominium unit that can make the claim. In 1976, while still a cardinal, the future Pope John Paul II visited the Parkfairfax apartment of Polish-American journalist John Szostak and offered his blessing... after a near accident with a Batmobile toy belonging to one of Szostak's children.

The great surge of Italian immigration to the U.S., which began in the 1880s and lasted until 1920, brought about four million Italians to this country. Many flocked to places such as Little Italy in lower Manhattan and comparable ethnic neighborhoods in Boston, Philadelphia and Baltimore, where new arrivals could speak their native language, find familiar food and churches in which to worship, and plug into a network that helped them to find employment. But Washington, D.C. didn't attract similarly large numbers of Italians. It was a government town without mills, factories or a commercial port, and there were fewer opportunities for unskilled former rural dwellers without language skills to support themselves. Instead, the area drew smaller numbers of skilled immigrants, such as the construction workers, artists and tradesmen who labored on the government buildings erected in the 19th and early 20th centuries.

Those early Italian immigrants to DC never really established a true Little Italy of their own. Instead, they mostly settled in two residential neighborhoods that vanished long ago — Swampoodle, near the U.S. Capitol and Union Station, and the Judiciary Square area.