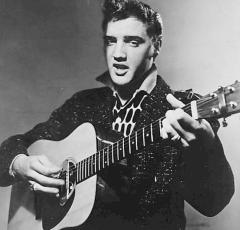 Elvis Presley made headlines when he showed up at the White House unannounced and offered his services to President Nixon to fight the war on drugs in 1970. It was an odd event, which led to an even odder photo. But the Elvis-Nixon meeting was memorable for another reason: It was one of only four appearances that Elvis ever made in the Washington, D.C. area.

Elvis' first visit to Washington was on March 23, 1956 — the same day, by coincidence, that his first full-length album, Elvis Presley, was released. Col. Tom Parker, who was in the process of taking over as the 21-year-old singer's manager, had close ties to Washington-based country disc jockey, manager and promoter Connie B. Gay, who booked Elvis to headline a floating concert on the S.S. Mount Vernon, a small ship that sailed the Potomac.

On December 21, 1970, Elvis Presley showed up unannounced at the northwest gate of the White House with a handwritten six page letter to President Nixon. The letter iterated Elvis's desire to become a "Federal Agent-at-Large" in the war on drugs.

After a brief discussion with Elvis and his body guards, Nixon aide Egil Krogh became convinced the singer was sincere, and thought he might be helpful in reaching out to young people about the dangers of drug abuse. Elvis and Nixon met later than same day and were photographed in the Oval Office. Years later, that picture is one of the most popular holdings in the National Archives.