Muhammad Ali twice defended his heavyweight boxing title at the old Capital Centre arena in Landover, Maryland. You're not likely to see either his April 30,1976 fight against Jimmy Young nor his May 15, 1977 bout with Alfredo Evangelista, both of which he won by unanimous decision, on highlight reels of Ali's greatest fights. Nevertheless, they gave Washingtonians a chance to catch an up-close look at "The Greatest," a larger-than-life athlete whose unconventional style and sublime physical grace was matched by his irrepressible talent for hyperbole and outrageous self-promotion. 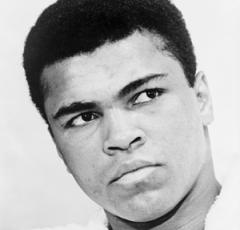 The PBS documentary The Trials of Muhammad Ali, covers the boxing champ's struggles outside the ring during the tumultuous mid-1960s, and his emergence as a symbol of protest and dissent for young people of that time. Ali's duality as a firebrand activist and a revolutionary icon is examplified, in some ways, by his controversial appearance at Howard University in April 22, 1967, where he gave a speech to African-American students just days before he refused induction in the armed forces, which led to his indictment and conviction for draft evasion.