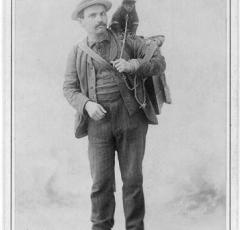 If you're a Peter Sellers fan, you're probably familiar with this scene in the 1975 film Return of the Pink Panther, in which Inspector Clouseau fails to notice a bank robbery because he is questioning a street accordion player and his chimpanzee companion about whether or not they have the required permit. ("I am a musician and the monkey is a businessman," the accordionist explains. "He doesn't tell me what to play, and I don't tell him what to do with his money.")

You may not realize that there's a grain of truth in the comedy.  In the late 1800s and early 1900s, there actually were street musicians who performed with dancing simians in the streets of the nation's capital, and they actually sometimes got into similar beefs with District police.