It was snowing on the 14th Street Bridge and traffic had ground to a standstill as thousands of federal workers and other rush-hour commuters tried to get home ahead of a major storm. With an awful metallic crack, a blue-and-white jet swept out of the swirling snow at 4 p.m., smacked against one of the bridge's spans, sheared through five cars like a machete, ripped through 50 feet of guard rail and plunged nose first into the frozen Potomac River.[1]

Moments later in a crowded subway car underneath the National Mall:

The train reversed direction.... with a loud popping and crunching sound and a sudden showering of sparks and electrical arcing.... Dozens of people of both sexes screamed. Slowly, surrealistically, the concrete abutment grew larger, closer and actually pressed the left center-rear of the car. The side and roof slowly caved in, almost as a foot crushes a tin can. More screaming, arcing, then silence.[2] 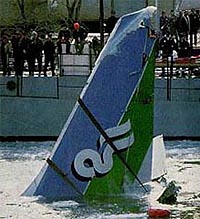 Wreckage of Air Florida Flight 90 being removed from the Potomac River in January 1982. (Source: Wikipedia)
It sounds like a scene in a Hollywood movie right before the hero or heroine springs into action. Tragically, however, this was no movie. It was real life in Washington on January 13, 1982. That snowy afternoon, the city saw two tragic transportation accidents happen within 30 minutes.

At 3:59 pm, Air Florida Flight 90 took off from National Airport in a heavy snow storm, bound for Fort Lauderdale. Almost immediately, the plane experienced mechanical problems related to ice buildup and went down. After hitting the 14th Street Bridge and crushing several cars, the plane fell into the icy Potomac River and began to sink.

Only a handful of the 79 people on board survived the initial crash. As they clung to floating wreckage in the freezing water, onlookers hurried to construct makeshift rescue lines from belts and jumper cables and Roger Olian, a sheet metal worker from Arlington, attempted to swim out to the victims. But, because of the ice and distance, these efforts were unsuccessful.

Help arrived in the form of a Park Police helicopter manned by pilot Don Usher and paramedic M.E. Gene Windsor, with a big assist from civilian Lenny Skutnik. Flying low enough to extend a lifeline to the victims, the chopper pulled the survivors to the shore one by one. However, when one survivor lost her grip on the rope and began to go under, Skutnik, a government worker at the Congressional Budget Office, jumped into the river and swam her to safety. 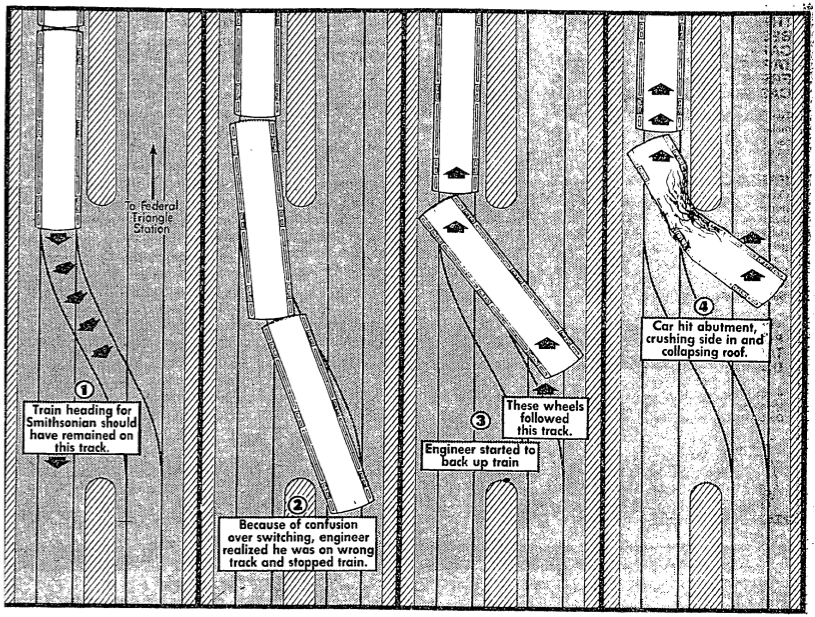 Washington Post diagram of fatal Metro derailment, which occurred on January 13, 1982.
About 30 minutes after Flight 90 went down, Metrorail suffered the first fatal accident in its history. Outside the Federal Triangle station, a bad rail switch diverted an Orange line train to New Carrollton onto the wrong track. When the train operator backed up the train to correct the problem, it derailed and the front car was crushed against a concrete tunnel support. Three passengers were killed and 25 others injured as metal and glass crunched around them.[3]

As the passengers waited for help in the dark, many at the other end of the packed train didn't realize the severity of the situation until they saw firemen wearing gas masks and carrying air tanks walking up the tunnel.

The day's final death toll was staggering: 74 people on the plane, 4 motorists on the bridge and 3 Metro riders died. And, to think it could've been worse were it not for the bravery of the first responders and witnesses. Just tragic. Let's hope nothing like this ever happens again.

Roger Olian, Lenny Skutnik, Don Usher, Gene Windsor and Arland Williams – another passenger on the plane who survived the crash but later drowned after passing the life line to other survivors – were all subsequently recognized for their bravery by the U.S. Coast Guard. Skutnik was also called out by President Reagan in the State of the Union address a few days after the accident.

For more on the Air Florida tragedy, check out the news report below from WUSA Channel 9 and the Washington Post's photo gallery.

WETA looks back at the people and events of the 1980s in a one-hour documentary, Washington in the '80s.