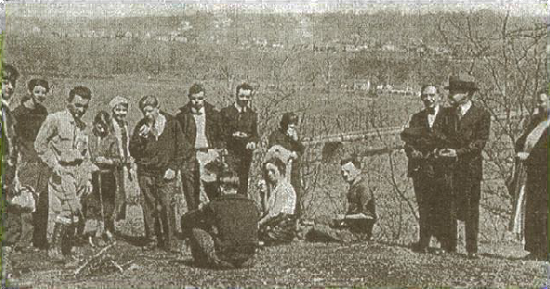 Robert Shosteck (third from the left) and the adventurous hikers on the Wanderbirds' first excursion on April 1, 1934. (Photo source: Wanderbirds Hiking Club)

It’s a casual Sunday in April 1934 and you’re looking for something to do. How about a hike in the great outdoors? Lucky for you, there’s a new hiking club in town and they are preparing for their very first hike!

Earlier that year, German immigrant and nature enthusiast Robert Shosteck approached The Washington Post to inquire if the paper was interested in creating a partnership. Shosteck offered to write multiple columns each week on various outdoor topics in exchange for The Post’s sponsorship of a new hiking club, which he called The Wanderbirds.[1]

The newspaper said, “Yes,” and the Wanderbirds’ first hike took place on April 1, 1934. Shosteck advertised it with his first article, “Post Readers Invited on Outing of Wander-Birds’ Hiking Club.” Taking place in the valley of the upper Potomac, the hike began at Station 20, went over the Chain Bridge, and up towards Gulf Run in Arlington. The article highlights possible scenery, including spring flowers, an old Civil War fence, and a colony of ant hills. As Shosteck describes it, “The valley of the upper Potomac is perhaps one of the most attractive regions for the early spring hiker. The bursting greenness of the spring seems to come first to this fertile wooded area.”[2]

Although the partnership with The Post ended in January 1936, the club members continued hiking. Over the years, the club encountered unpredictable difficulties. With World War II came gasoline rationing, halting chartered bus service and forcing the Wanderbirds to find alternatives for transportation. Urbanization and population growth required them to travel farther distances to hike, and where many original hiking trails once existed, now lay vast suburban developments and highways.[3] As the newspaper reported in 1964, “With more and more housing developments pushing out still farther in all directions from the city, hike leaders have had to look farther afield for trails.”

Indeed, hiking the route of the original Wanderbirds hike would be difficult today. Club member Jim Matlack actually attempted to do it a few years ago and wrote up his experiences for the Arlington Historical Society.

Far more has changed in this part of Arlington than has remained the same. Two modern, suburban subdivisions now cover, for the most part, an area that less than a lifetime ago was undeveloped with only a few houses. A noisy highway slices through one of the few remaining sections of woodland in that part of Arlington. One could not take the 1934 hike today due not only to residential development but also to the danger of walking along Glebe Road, and since January 3, 1960, one cannot take a streetcar out to the vicinity of Chain Bridge and walk across it into Arlington.[4]

But those weren’t the only changes. As one long-time member of the group described it, “I think the primary issue has been the closing of trail access by landowners. In some cases it was new owners who took a proprietary view of ‘their land’; in others, the exposure to liability for injury occurring to users of the land.”[5]

Despite these challenges, the club has remained dedicated to its mission and continues to hike every Sunday, rain or shine. If you’re looking for something to do on Sunday, check out the Wanderbirds website for the list of upcoming hikes. You may have to travel a little further outside of D.C. than Robert Shosteck and company did in 1934, but you’re bound to have a good time.

Below are two maps. The first is an original drawing by Shosteck published in his Post article which outlines the first Wanderbirds' hike in 1934. The second is a modern Google images map of that same area. The biggest obvious difference is the busy George Washington Memorial Parkway running straight through the landscape, which now would have to be crossed under to reach the other side of the old trail. On Shosteck's map, notice the curved "Cherrydale Rd" (now N. Glebe Rd) and the "Dirt Road" paralleling GW Memorial Pkwy (now Military Rd). On the left, the trail along "Gulf Run" is now in the midst of neighborhoods along Gulf Branch creek. The Chain Bridge is still in the same location, but notice across the Parkway near Canal Rd. NW, you can see the Capitol Crescent Trail. This popular biking and running trail follows along the abandoned B&O Railroad tracks. And, the Cabin John Streetcar Line, which many early Wanderbirds would've used to reach the starting point for the hike, stopped operation in the 1960s.  No wonder Jim Matlack had trouble following the original trail! 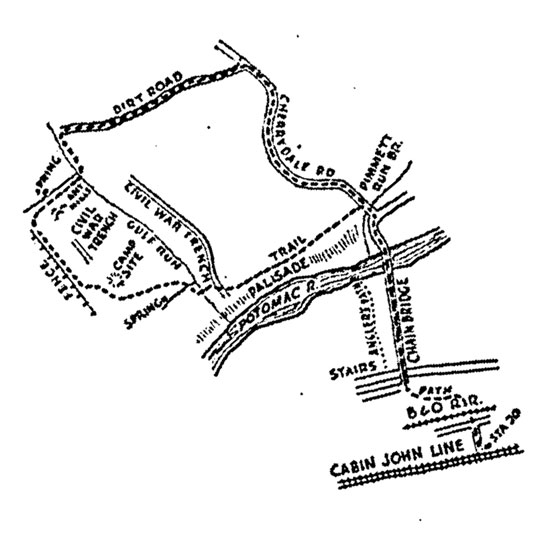 An original drawing by Shosteck outlining the trail followed on the Wanderbirds' first hike in 1934. (Photo source: Wanderbirds Hiking Club) 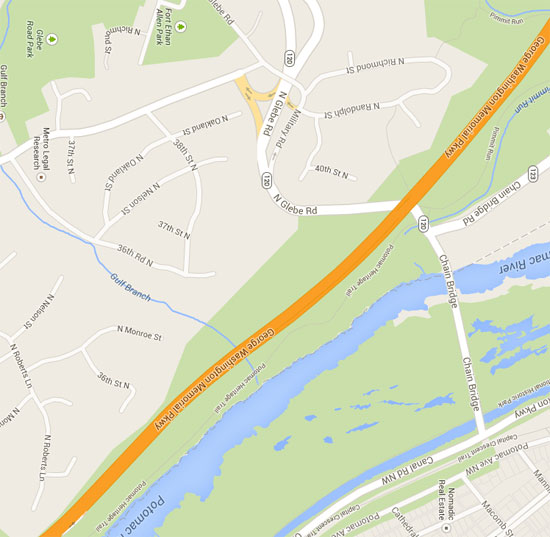 A modern view of the landscape of the original Wanderbirds hike. (Photo source: Google Maps)

A special thanks to Jack Dawson of the Wanderbirds Hiking Club for providing a detailed history of the club, and the Historical Society of Washington for help with this post.