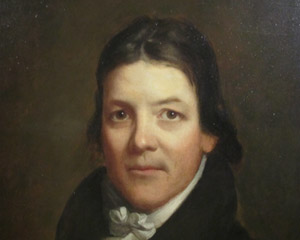 John Randolph's strong feelings about honor caused him to act very strangely in his 1826 duel with Henry Clay. (Photo source: Wikipedia)
A complicated sense of honor can get you killed. That’s why people like John Randolph of Roanoke update their wills before engaging in potentially suicidal duels, like the one Randolph had with Henry Clay in 1826. And, boy was Randolph’s idea of honor super complicated.

The reason for the duel was that Randolph, a Virginian Senator, had seriously insulted Henry Clay in a speech on the Senate floor. He’d called President Adams and Secretary of State Clay a case of “puritan with the blackleg,” blackleg being a particularly nasty and often fatal disease that affects livestock.

While definitely insulting, and probably in bad taste to boot, the tradition of the day dictated that Randolph’s words could not be used to incite a duel. That’s because senators enjoyed special privileges, which allowed them to speak ill of their political rivals while conducting Senate business and not face gunfire. (Side note: It’s probably good that this policy was in place. Otherwise we would’ve been facing a serious shortage of Senators.)

That’s all fine and good, but Clay was under the mistaken impression that Randolph had waived his senatorial privileges in his speech, and so Clay went ahead and challenged Randolph to a duel. And while Randolph could’ve ended the matter by simply reminding everyone that he hadn’t waived any of his special privileges, that’s not what he did.

Randolph actually accepted the challenge, all the while making a big deal that Clay had no right to issue it. And, because Randolph felt so strongly that Clay had no right to issue the challenge, Randolph decided that he wouldn’t shoot at Clay during the duel – out of principle at the way the matter was handled and because he had an “entire unwillingness” to injure Clay or make a widow of Mrs. Clay. 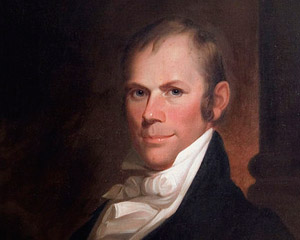 Henry Clay was enraged by statements made by John Randolph and challenged him to what might have been the weirdest duel in history. (Photo source: Wikipedia)
To make the episode even more strange, Randolph insisted that the duel take place on the Virginia banks of the Potomac, rather than in Washington or Maryland. If he was going to have his blood spilled, and – let’s face it – all signs pointed to that, he was going to do it on his home soil. The only problem was that dueling was illegal in Virginia. For a man so attuned to honor as Randolph this might have been a big issue but he reasoned that he wouldn’t really be breaking any laws since he wasn’t going to fire back at Clay. Problem solved!

So – just to review – John Randolph was entering into what could be a fatal duel and he had no intention of winning. No wonder this guy is remembered just as much for his eccentricity as for his oratory skills. In other news, chauvinism is a complicated thing.

As you may recall from our piece about the Decatur-Barron duel in 1820, “seconds” were men who accompanied the duelists and negotiated the terms of the duel. Well, John Randolph’s seconds, General James Hamilton and Colonel Tatnall, were not overly impressed with Randolph’s impeccable honor. For a week they tried to dissuade him of his notions, wanting to avoid having to watch their dear friend die, but Randolph would have none of it. The only other person who knew Randolph’s intentions was Senator Thomas H. Benton, a mutual friend of both Clay and Randolph, but he was sworn to secrecy. In fact, everyone who knew that Randolph was not going to fully participate in the duel with Clay was sworn to secrecy, so Clay had no clue about Randolph’s plans.

The date for the duel was set for Saturday, the 8th of April. Clay and Randolph met on the Virginian side of the Potomac at sundown. Also in attendance were two seconds and a surgeon for each participant and Senator Benton. The weapon was the pistol and the distance was ten paces. One person would give the word and then count to three, after which the duel would begin.

It was a pretty tense meeting. Half the people there were under the reasonable assumption that two political opponents were going to fight to the death, and the other half feared that there wouldn’t be a fight at all. Even Randolph looked like he might lose his nerve and fire at Clay; he’d told Benton that if he saw any outright malice in Clay’s eyes, he’d shoot. Nerves frayed further when Randolph’s gun accidentally fired before the duel started due to the pistol being set on a hair-trigger. Fortunately Clay forgave the incident, recognizing it as a misfire.

The time for the duel arrived and the men readied their pistols. The word was given and both fired, Clay true and Randolph wildly. Both missed so they readied their pistols again for another round. This time, instead of firing wide, Randolph simply shot into the air, clearly signaling that he wasn’t participating; Clay’s close shot the first time must have spooked him.

When Henry Clay saw Randolph’s intent, he halted the duel and purportedly said “I trust in God, my dear sir, you are untouched; after what has occurred, I would not have harmed you for a thousand words.” Randolph replied simply, “You owe me a coat, Mr. Clay,” as one of the bullets had grazed his overcoat. The two men parted on agreeable terms and on the following Monday exchanged cards, courteous relations between them restored. Phew!

Modern folk may think this whole affair was a ridiculous way to get people killed for no reason, but Benton made a good point in his account of the duel: “certainly dueling is bad… but not so bad as its substitute – revolvers, bowie knives, blackguarding and street assassinations under the pretext of self-defense.”

Wow, times were dangerous back then. Good thing honor has gone out of style, we’re all a lot safer.