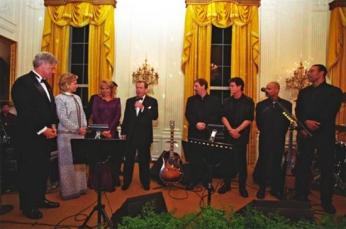 Rock singer, songwriter and guitarist Lou Reed, who died on October 27, 2013 at age 71, is best known as a lyrical chronicler of New York City's debauched avant garde subculture of the 1960s, a time when his band, the Velvet Underground, provided the soundtrack for artist Andy Warhol's druggy, gender-bending milieu. But Reed also could claim an intriguing distinction in the musical history of the nation's capital. The Rock and Roll Hall of Fame inductee once was called upon to provide musical entertainment at the White House, at the request of a visiting foreign head of state.

It happened on Sept, 17, 1998, when President Bill Clinton hosted a state dinner to commemorate the visit of Czech Republic president Vaclav Havel. Thirty years before, as one of the young "Prague Spring" intellectuals chafing under the Soviet domination of what was then Czechoslovakia, Havel had taken a trip to New York City. As he would later recount in his autobiography, he bought a copy of 1967's The Velvet Underground & Nico. Havel brought the record home and circulated it among Prague musicians, and Reed's songs helped inspire a homegrown psychedelic rock group, Plastic People of the Universe, who--despite being banned and persecuted by authorities--became icons to Czechs who aspired to live in a free society.  And Havel's seminal role in the rebellious Czech artistic scene eventually led to his becoming a leader in his country's indefatigable democracy movement, which eventually toppled communism and established democracy in 1989. The popular name for that rebellion--the Velvet Revolution--gives a hint of how much Havel was inspired by what he saw as Reed's musical celebration of personal freedom.

Thus, when Havel was making arrangements in the summer of 1998 to visit the U.S., it wasn't that surprising that hearing Reed perform was one of the top priorities on his to-do list, after visiting the grave of Martin Luther King, Jr. As Havel wrote in a journal entry reproduced in his memoirs: "Have we arranged for Lou to play at the White House? That would be sensational! He's counting on it, but I don't know whether he's living with an illusion..."

It would have been understandable if Clinton--who as the time was in the throes of the Monica Lewinsky scandal that would lead to his impeachment--had rejected the request for a White House concert by Reed, since hanging out with a rocker famed for his licentious lyrics about drag queens and drug use wasn't exactly the sort of photo op that he needed. Somewhat amazingly, though, Clinton agreed.

When Reed showed up for the dress rehearsal for the dinner, though, he discovered that White House decorum was a bit different from that of Max's Kansas City, the raucous hipster art and music hangout where the Velvets had once recorded a live LP. As Walter Scheib and Andrew Friedman recount in the 2007 book White House Chef, Reed proceeded to turn up his amplifier so loud that the White House's chandeliers were shaking. Then-social secretary Capricia Marshall asked him to turn it down a bit. "You'll kill whoever's sitting in front of this speaker," she reportedly said.

Reed refused. "This is my art, my music," he supposedly responded in a huff.

But when Reed approached Marshall a few hours later and asked for some friends of his to be seated up front, the social secretary slyly turned the tables on him. "Mr. Reed, you don't understand," she replied in a sarcastic tone. "These tables are my art." Reed responded with a "well-played, madam" sort of chuckle, and the two worked out a compromise in which Reed would play at a lower volume, in exchange for some seating concessions.

According to a contemporaneous Washington Post account of the event, Reed performed a 35-minute set for an audience that included luminaries such as former Secretary of State Henry Kissinger, author Kurt Vonnegut, model Paulina Porizkova, and fellow music stars Stevie Wonder and Ric Ocasek of The Cars. At the conclusion, a smiling President Clinton said, "If you had as much fun as I did just now, you should give President Havel all the credit."

Reed, it should be mentioned, wasn't the first pop musician to perform at the White House for a foreign leader. A considerably less controversial act, The Carpenters, played at an event for West German chancellor Willy Brandt in 1973.