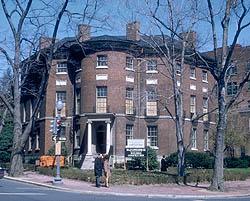 The Octagon house on 18th and New York Ave, NW is well-known for both its architecture and for the spirits that are said to linger on in the residence. Originally owned by Colonel John Tayloe III, one of the richest men in  late 18th century Virginia, the Octagon has a storied history peppered with tales from the ‘Great Beyond’.

When Tayloe was looking to build a winter home, his personal friend George Washington suggested the District. Tayloe commissioned William Thornton, who designed the Capitol building. Thornton designed a structure, costing $13,000, which fit neatly into the triangle lot it was situated on. The layout of the building is quite imaginative, but the first thing to understand about the Octagon is that it only has six sides, not eight. Buildings in that time were referred to as octagons if they had eight angles and round rooms were also called octagons because they are framed out with eight sides.

The Octagon has eight angles and the front of the building is a large column forming three stories of round rooms on the inside. The rest of the building is wedged-shaped to fit onto the lot.  The exterior was done in brick and sandstone and the interior was designed with luxury in mind:  furniture imported from England, a magnificent spiral staircase connecting the levels, and, according the archeologists, maybe even an indoor toilet![1]

The Octagon housed was host to many famous guests, including John Quincy Adams, Lieutenant General Lafayete, Commodore Stephen Decatur, and John Randolph of Roanoke. But let us not forget the common folk in our description of the residence. The basement held the kitchen and quarters from slaves, it was separated from the rest of the house by a double ceiling designed to block noise in the lower level from reaching the upper levels. The elegant front stairs hid the narrow backstairs which the slaves would use to get from the kitchen to the top three floors through “a series of discreet service doors.” The slaves could be reached by using the elaborate system of bells installed in the house.[2]

The spiral staircase is not only beautiful but also the place of, some would have you believe, at least two hauntings. Colonel Tayloe and his wife Ann Ogle had fifteen children and two would die on these stairs. These two daughters both apparently were in love with inappropriate men (one was even a British officer!) and after quarrelling with their father, both fell from the stairs to their death. Their deaths were years apart but the similarities in their accidents could lead one to believe that Tayloe went to an early grave not out of grief, but from guilt.

The unlucky daughters are remembered today in popular ghost stories.[3] One daughter can apparently be seen on still nights, in the form of a candlelight ascending the stairs. The other makes her presence known at the bottom of the stairs. Her lifeless body is said to have turned over the edge of the carpet at the foot of the staircase and today the carpet is, according to the story, found with the edge turned over no matter how many times one straightens it. 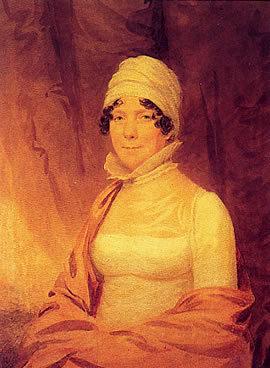 The next ghost said to haunt the Octagon is none other than that of Dolly Madison, who is a very popular ghost in Washington D.C.; she has the most hauntings attributed to her in the whole District! How Mrs. Madison came to the Octagon is just another example of the significance of the Octagon in its early days. After the burning of Washington and the Madison’s flight from the city, the presidential couple needed a place to stay while the White House was being rebuilt. Colonel Tayloe offered them the Octagon and the Madison’s graciously accepted. In was in the second floor circular room that President Madison signed the Treaty of Ghent, ending the War of 1812, and Dolly Madison held many of her famous soirees and balls in the residence. Her lingering presence is detected in the smell of lavender in the house, Dolly Madison’s favorite perfume.

After the Madisons vacated the Octagon and the Tayloes passed on, the house was used as a boarding house and for government offices. It was during this period that the Octagon gained its fourth ghost, the ghost of a gambler who had rooms on the third floor. The man was a notorious cheat and was shot and killed in a card game. The story goes that as he fell to the floor, he tried to keep himself upright by grapping onto a bell rope. Didn’t work. That final bell can still be occasionally heard, however, if your belief in the spirit world is that strong.

In the late 19th century, the American Institute of Architects bought the Octagon as a headquarters and in the mid-20th century turned it into a museum when they moved to a larger building nearby. Over the years, the Octagon has been renovated many times, including in the ‘50s and ‘60s when the old wood of the building was replaced with steel and concrete, under the common misconception of the time that this would make it stronger. Unfortunately, this greatly undermined the integrity of the building and subsequent renovations (costing millions of dollars) have attempted to restore the building to his original form.

The building is open to the public as a museum and is recommended not only for the interesting history that has taken place there but also for the spooky stories one could possibly have after visiting.

“About the Octagon.” American Institute of Architects, AIA.org, 2014.

Forgey, Benjamin. “Buried Secrets at the Octagon: Peeling Back Layers of History at 191-Year-Old Museum.” The Washington Post, 30 Nov. 1991.