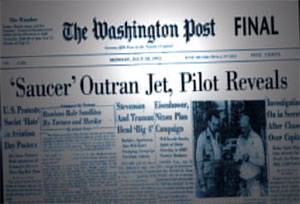 Though the government discounted them, flying saucers over DC were big news in the summer of 1952.
In the 1950s, Washington seems to have been a popular destination for UFOs, both actual ones and cinematic. Two popular science fiction movies, 1951'sThe Day the Earth Stood Still and 1956's Earth Vs the Flying Saucers, depicted alien spacecraft arriving in the nation's capital, to the consternation of both residents and the government. But those close encounters may have seemed a bit more plausible, given that the Washington area also was the scene of one of the most celebrated real-life UFO incidents ever--one that still intrigues those who ponder the possiblity of extraterrestrial visits to Earth.

Though the principal photography for director Robert Wise's The Day the Earth Stood Still  was shot on the 20th Century Fox studio lot in southern California in the spring of 1951, the movie ostensibly is set in Washington and has a distinctively local feel, because of location footage shot here by the production's second unit. The film opens with newcasters all over the world alerting humanity to the approach of an object from space entering the atmosphere at 4,000 miles per hour. It heads for Washington on what an announcer--actual radio journalist Elmer Davis, who headed the U.S. Office of War Information during World War II--tells us is full of tourists enjoying  "beautiful spring weather." Cut to an shot of the Lincoln Memorial, with a Colonial Historic Tours bus disgorging passengers in front, followed by a glimpse of the Washington Monument, and a serviceman and his date walking with the Jefferson Memorial in the background.  But then, the extras portraying tourists suddenly point and look to the skies with alarmed expressions.

The Day the Earth Stood Still  provides an interesting glimpse of Washington as it looked at midcentury. As the silvery flying saucer descends upon Washington, flying over the Capitol and the original Smithsonian Institution building, it hovers over the Ellipse, which at the time had four baseball diamonds, and then lands on the west side. The next shot in the film shows one of the District's long-vanished streetcars rolling up 15th Street NW, as a man darts through traffic shouting about the alien craft.  A contingent of squad cars, their sirens blaring, are seen pulling out of Union Station, which the filmmakers passed off as the police headquarters. A subsequent scene features another Washington icon of the time. Fedora-clad syndicated columnist Drew Pearson, who does a mock newscast for local television station WMAL, whose call letters are prominently displayed on the microphone next to him. "Every eye, every weapon is trained on the ship," he reassures viewers.

As a crowd of spectators gathers and soldiers and armored vehicles form a cordon around the UFO from which extraterrestrial humanoid Klaatu (Michael Rennie) and giant robot Gort (Lock Martin) will emerge, it's possible to glimpse the temporary military barracks that were erected on the Ellipse during World War II, to house troops assigned to protect the White House.

In the plotline, after being shot by a soldier, Klaatu is taken to Walter Reed Hospital for treatment. He escapes, and wanders through the city, eventually taking refuge in a boarding house. It's there that he meets a war widow, Helen Benson (Patricia Neal) and her son Bobby (Billy Gray). Klaatu and Bobby later travel to Arlington National Cemetery to visit the grave of Billy's father. The scene in the film, which uses stand-ins for the actors, takes place next to Arlington House, the onetime residence of Gen. Robert E. Lee.

When it was released in September 1951, The Day the Earth Stood Still performed adequately, if not spectacularly, at the box office, taking in $1.8 million--about twice what it cost to make.  The movie's message--that Earth leaders had to give up their warlike ways, or else alien robots would turn it into a "burned-out cinder"--may have been a bit too dovish for a nation that was still embroiled in the Korean War, with Congressional inquisitors looking for communists in every closet. Eventually, though, the film would be recognized as a science fiction classic, and eventually it was even honored with a spot in the Library of Congress' National Film Registry.

The summer after The Day the Earth Stood Still was released, however, Washington experienced an incident that may have made some people wonder if the movie was totally fictitious. Just before midnight on July 19, 1952, an air traffic controller at Washington National Airport spotted seven unidentified objects on the radar screen, about 15 miles to the southwest of the District.  "Here's a fleet of flying saucers for you," he jokingly told his supervisor, according to a newspaper account. But officials became alarmed when a second controller at another facility revealed he not only had the objects on his screen, but could see "a bright orange light" through the window of his control tower. Shortly after that, an airman at Andrews Air Force Base  reported seeing a strange orange ball of fire, similar to what one of the controllers had described, followed by a second ball. At 12:30 a.m., one of the objects buzzed a runway at National, and another controller got a glimpse of it. He described it as an orange disk, and said that it hovered at 3,000 feet (914 meters) over the airport before disappearing.  Military jets from a base in Delaware were scrambled to chase down the apparent intruders, but the objects just as mysteriously vanished, though just before dawn, another witness again briefly saw what he described as five large disks, flying in loose formation.

After what appeared to be similar UFOs appeared again on July 26, President Harry Truman called Air Force Capt. Edward J. Ruppelt, supervisor of the military's then-secret Project Blue Book, an investigation of UFO reports. Ruppelt concluded that the objects on the radar screen were false readings caused by trapped layers of warm air in the atmosphere, but UFO enthusiasts have never accepted that explanation.

In an upcoming post, we'll look at another famous 1950s sci-fi movie which takes place partially in Washington, Earth vs. the Flying Saucers, and how it may have been inspired in part by a real-life train crash at Union Station. For more on DC's wild saucer summer of 1952, check out this WETA Extra produced by WETA TV 26.