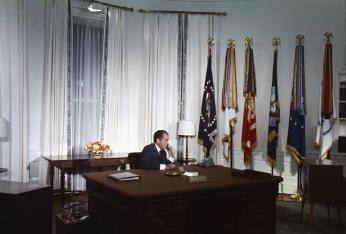 “That’s one small step for man, one giant leap for mankind.”

Most Americans either learned these words in school, or watched them delivered live on television straight from space. They are, of course, the words spoken by Astronaut Neil Armstrong as he became the first human to walk on the moon in 1969. Approximately 530 million Americans across the country sat glued to their television sets that July evening watching history in the making, and those sitting inside the White House were no exception.[1] It may have been President John F. Kennedy who jumpstarted the space program in 1961, but it was Richard Nixon sitting in the Oval Office the day that JFK’s promise of putting a man on the moon became a reality.

The objective of the Apollo 11 mission was to complete JFK’s 1961 national goal of performing a crewed lunar landing, and returning to Earth.[2] The Apollo 11 Command Module was launched on July 16, 1969 from Cape Kennedy in Florida, and contained Commander Neil Armstrong, Command Module Pilot Michael Collins, and Lunar Module Pilot Edwin “Buzz” Aldrin. 102 hours and 45 minutes into the mission, Armstrong and Aldrin landed the Eagle Lunar Module in the Sea of Tranquility on the Moon’s surface—an event marked by Armstrong’s famous words “the Eagle has landed.”[3] Four hours later, at 109 hours and 42 minutes since the launch, Armstrong stepped out of the Eagle onto the moon with the TV camera that transmitted the event for the millions of people watching live on Earth.[4]

President Richard Nixon was one of millions watching the grainy black and white images on television late Sunday night July 20, 1969. Among those in the Oval Office with him were members of the press, other members of the President's staff, and former NASA astronaut and White House – NASA liaison, Frank Borman. Borman, who had been an astronaut in the Apollo 8 mission, watched the events unfold live with the President.[5] According to Borman, watching the successful landing after eight years of hard work on the Space Race was “like winning the Super Bowl,” and everyone in the Oval Office was elated at what they were witnessing.[6] 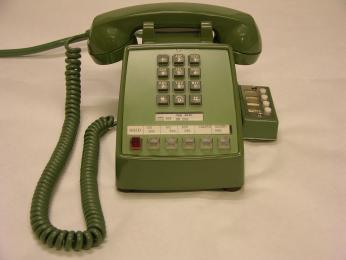 Just before midnight Eastern Standard Time, Nixon congratulated the Apollo 11 crew through the longest-distance phone call in history. Using an olive green telephone, and a little help from NASA, Nixon was connected with Armstrong and Aldrin, who were still on the surface of the moon, and delivered these words of congratulations:

“Hello Neil and Buzz. I’m talking to you by telephone from the Oval room at the White House, and this certainly has to be the most historic telephone call ever made from the White House. I just can’t tell ya how proud we all are of all that you have done. For every American, this has to be the proudest day of our lives. And for people all over the world, I am sure that they too join with Americans in recognizing what an immense feat this is. Because of what you have done, the heavens have become a part of man’s world. And as you talk to us from the Sea of Tranquility, it inspires us to redouble our efforts to bring peace and tranquility to Earth. For one priceless moment in the whole history of man, all the people on this Earth are truly one. One in their pride of what you have done, and one in our prayers that you will return safely to Earth.” [7]

After a slight pause as the audio was transmitted to space, Armstrong responded:

“Thank you Mr. President. It’s a great honor and privilege for us to be here, representing not only the United States, but men of peaceable nations, men with an interest and a curiosity, and men with a vision for the future. It’s an honor for us to be able to participate here today.” [8]

Nixon responded that he was looking forward to seeing them on the USS Hornet upon their return that Thursday, completing the first-ever interplanetary telephone conversation.

Interestingly, because of the high-risk involved with any trip to space, Nixon’s speechwriter, William Safire and NASA liaison Frank Borman, had prepared a speech for Nixon to deliver in place of the phone call, should the mission turn tragic.[9] The existence of the speech, entitled “In Event of Moon Disaster,” was not revealed until July of 1999, exactly 30 years after the successful landing. 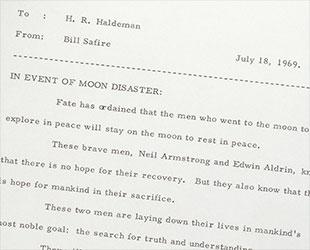 In a 1999 interview with Tim Russert, Safire explained that Borman called him and told him to consider writing an alternative moon speech for the President in case of a mishap.[10] Safire was told that the most dangerous part of the mission was getting the lunar module back into orbit, and if the astronauts were unable to do this, Armstrong and Aldrin would likely have to be abandoned on the moon, where they would eventually perish.[11]

With this in mind, Safire drafted the speech, beginning with the sentence: “Fate has ordained that the men who went to the moon to explore in peace will stay on the moon to rest in peace.”[12] The rest of the speech commended the bravery of the Apollo 11 astronauts, and would have been a place for the widows and American public to find comfort. 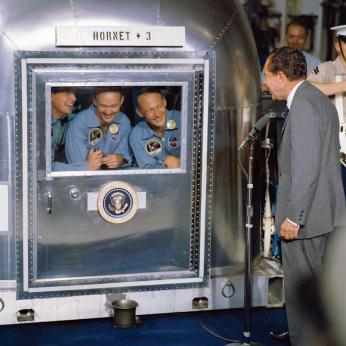 Safire then sent the speech to Nixon’s Chief of Staff H.R. Halderman, who had it ready to go for the President should it become necessary. Thankfully, however, on July 24, 1969, the module carrying all three astronauts of Apollo 11 splashed down safely in the Pacific Ocean, rendering the mission successful, and allowing this speech to go unknown for 30 years.

Once the men were recovered from the ocean, they were brought aboard the USS Hornet, and confined to the Mobile Quarantine Facility (MQF), where they had their first face-to-face chat with President Nixon.[13]

Upon return, the astronauts participated in celebratory parades and events in New York, Chicago, and Los Angeles. The Los Angeles celebrations took place on August 13, 1969, and Nixon hosted an enormous 1,440 guest state dinner at the Century Plaza Hotel—an event known as the greatest state dinner to be held outside of Washington.[14] 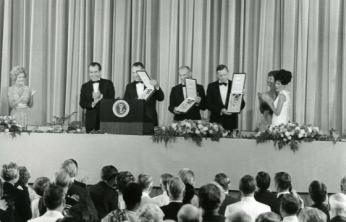 Distinguished guests, such as Congressmen, foreign leaders, movie stars, former President Johnson, and Jackie Kennedy Onassis looked on as Nixon presented each astronaut with a Presidential Medal of Freedom, before the men of Apollo 11 took off for a 45 day tour, traveling to 24 countries, 27 cities, and emphasizing the willingness of the United States to share its space knowledge with the rest of the world.[15] 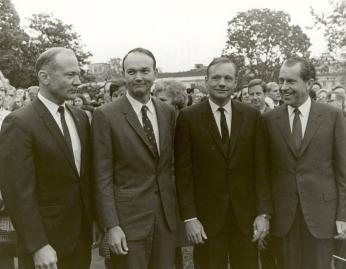 Four months after the Apollo 11 launch, on November 5, 1969, Armstrong, Aldrin, and Collins completed their international tour with a visit to President Nixon on the White House lawn, bringing the wonder and pride of the moon landing right back to the District.[16] It was, however, the events of July 20, 1969 that marked the United States as the winner of the Space Race, accomplished JFK’s mission to put a man on the moon, and likely produced the largest long-distance phone bill the world had ever seen…