April 14th, 1865 marks the date of one of the most shocking and memorable events in Washington and American history: the assassination of Abraham Lincoln. By 10:30 p.m. that night, the President’s death was looking imminent, and after hearing this news just two blocks over at 7th and D Streets NW, Gustave Lansburgh, owner of Lansburgh & Bros. Fancy Goods Agency, decided to start decorating his store in mourning black. It was this small decision that would transform Lansburgh’s dry goods store into one of the most prosperous Washington department stores for the next 113 years. 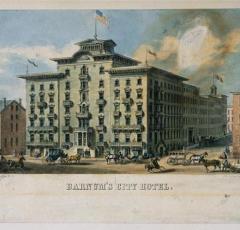 Abraham Lincoln’s election to the presidency on November 6, 1860, was the catalyst for vehement anger in the South, where the wave of secession had already begun to stir. The anger at the president-elect became so great that several conspirators vowed he would never reach the capitol to be inaugurated.

By many accounts, Lincoln was aware but unmoved by the threats that rose around him in early 1861 as he prepared to relocate from his home in Springfield, Illinois to the White House. He planned a grand 2,000-mile whistle-stop tour that would take his train through seventy cities and towns on the way to his inauguration. He was sure to be greeted by thousands of well-wishers, but a more sinister element was also gathering.