For years, Turkey Tayac fought almost singlehandedly for the rights and recognition of his Native American group, the Piscataways. In the 1950s, he found some unlikely allies and successfully fended off an effort to build high rise apartments on sacred Piscataway lands in southern Maryland. A few years later, he helped convince the National Park Service to preserve the land for posterity. It was a remarkable achievement, and Turkey Tayac's work for inclusion would continue, even after his death.

For over 40 years, Claude Moore Colonial Farm was a well-preserved time capsule of 18th-century farm life in northern Virginia. Since the early 1970s, costumed staff and volunteers lived as if it was the year 1771. They grew and cooked their own food, sewed their own clothes, and raised their own livestock. But after a tumultuous battle with the National Park Service, the colonial farm in McLean, Virginia permanently closed its doors on December 21, 2018. The National Park Service hosted an open comment period, which ran through April 25, to decide the future of the land.

David Lassman discusses the creation and of the George Washington Memorial Parkway.

Thousands of people drive on it everyday, but sometimes we forget that the George Washington Memorial Parkway is not just a commuter highway. It's a national park. And like our other national parks, the Parkway tells a story about our nation's past.

"You don’t have to look too far when you’re in Shenandoah to see the relics of human habitation. You don’t have to be a historian. You don’t have to be an archaeologist. You can stay on trail. You can’t help but find stone walls that were built by somebody, clearly. There’s old roads. There’s house foundations. These are things you can see from the trail. So, I just saw these things over many, many years and I kind of wondered for awhile what they were all about but I didn’t really look into it for quite some time, until I started going a little bit off trail and finding more things off trail. And my curiosity was really piqued and I wanted to know, who were these people? Why are they not here? Why did they leave? Where did they go? And, what is their story all about?" 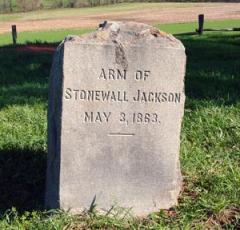 At the Battle of Chancellorsville, Confederate Lieutenant General Thomas J. "Stonewall" Jackson was mortally wounded -- a very significant event during the Civil War. Indeed, historians have long debated the impact of Jackson's death on Confederate performance in subsequent battles such as Gettysburg. General Robert E. Lee, for one, felt the loss deeply, likening it to "losing my right arm."

While we are on the subject of lost arms...