For the first weeks of his presidency, Calvin Coolidge conducted business from a different iconic D.C. residence — the Willard Hotel. The Coolidges lived at the hotel while he was Vice President and they waited to move to the White House until Warren Harding’s family had time to move out after he died in office.

Washington, D.C. is a city rich in history with many stories to tell. Inevitably some of those stories take on a life of their own, even if the facts don’t necessarily back them up. For example, the story that the term “lobbyist” was created by President Ulysses S. Grant to describe the flocks of favor-seekers he encountered during his frequent sojourns to the lobby of the Willard Hotel. 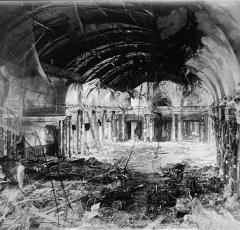 There have certainly been worse fires, but the Willard Hotel blaze of 1922 caused quite a stir. It resulted in $400,000 — about $5,400,000 today — in damages to the grand hotel and sent some of the District's most distinguished citizens and guests out into the street in their pajamas. Some just moved a little more quickly than others. Apparently, emergency procedures were a little different back then.