To the average visitor, the Lincoln Memorial appears to be a timeless part of the National Mall. However, this classical commemoration to the sixteenth president was dedicated less than one hundred years ago, in the presence of Civil War veterans, Robert Todd Lincoln, two Presidents and a crowd of thousands.

Nearly every year since 1878, children and their parents have flocked to the White House grounds on the Monday after Easter to roll eggs at the annual White House Easter Egg Roll. In the era of Jim Crow, it was one of the few social events where people from all races, and classes could mingle. But how did the tradition get started?

“Only YOU can prevent forest fires.”

Many of us, especially former Boy Scouts like myself, probably associate that statement with campfire safety. Indeed, Smokey the Bear has been around for as long as most of us can remember, reminding us to follow safe fire practices in the backcountry. However, Smokey’s message – and even the bear himself – didn’t have much to do with campfires at first. His story actually dates to World War II and has a definite Washington flavor to it.

If you’ve ever hiked Great Falls Park, you might have stumbled across the ruins of a long lost town. Matildaville was to be a bustling hub on an expansive trans-national trade route. But today, a spattering of stone ruins and a handful of crumbling locks are all that remain of a town conceived by none other than George Washington. 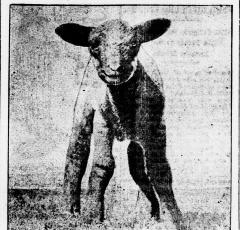 Washington in the 1910s was apparently the place for sheep. Over the decade, at least two herds were brought into the capital to graze in the shadow of the nation’s most treasured monuments. 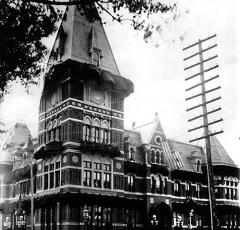 It may be hard to picture now, but the National Mall was once home to a lot of commercial and industrial development. Perhaps the most notable — if also maligned — site was a railroad station belonging to the Baltimore and Potomac Railroad. The station itself embraced a Gothic architectural style, but the train shed that extended from the station was considered an eyesore. It proved to be one (of many) motivations behind the 1901 McMillan plan to beautify and renovate America's front yard. 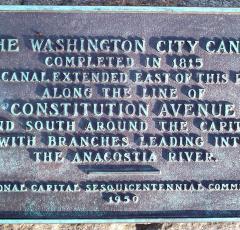 Just within sight of the Washington Monument is a little stone house not open to the public. Used for National Park Service storage today, this house is the last remnant of one of the biggest mistakes in municipal planning in the District’s history: the Washington City Canal.

The canal was first conceived of by architect Pierre Charles L’Enfant. He envisioned something grand like, well, the Grand Canal at Versailles. George Washington thought the canal was a good idea because it would increase commerce by bringing goods directly into the city center.

But, right from the beginning, the proposed canal was plagued with problems.

Today, the founding documents of America - the Constitution, the Declaration of Independence, and the Bill of Rights - are on display at the Charters of Freedom exhibit in the Rotunda of the National Archives. Tourists from across America and the world make pilgrimages to see the most revered documents in American history. Extensive preservation measures have been put in place. But this wasn’t always the case. For most of our nation’s history, these charters, now considered priceless, were kept with the United States’ other government documents - that is, shoved wherever officials could find space. Before the National Archives was founded in 1934, these documents were stored essentially at random, in basements, on walls, or even piled in hallways.

The National Building Museum’s new indoor beach may be making headlines, but it’s not D.C.’s first seashore. For a period of time between 1918 and 1925, Washingtonians dipped into the Tidal Basin to experience some summertime heat relief. Now I know what you’re thinking: you couldn’t pay me to swim in that water today. But with a serious lack of public pools, and no air conditioning, citizens back then were pretty desperate.