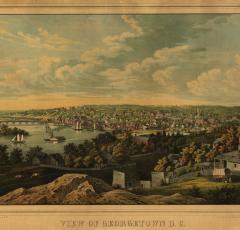 Who was Georgetown named for? There are actually a few candidates. As it turns out, you’ll find a lot of Georges in this D.C. neighborhood’s history.

The soundtrack of the summer of 1976 was a special one. Just after the USA celebrated its Bicentennial, one unlikely song, with its folksy style and airtight harmonization, soared past the countless disco tunes to the number 1 spot on the Billboard charts. No matter how you feel about it, “Afternoon Delight” was perhaps the perfect way to celebrate our independence. With lyrics referencing “skyrockets in flight,” the song (and the band behind it) has a very strong connection to the Nation’s Capital.

It all started in 1974, when musicians Bill Danoff and Margot Chapman stopped at Clyde’s in Georgetown for a meal...

Under normal circumstances, this burst of creativity might have gone nowhere, but the couple happened to be a duo of professional musicians. So, with the help of John Denver, they soon turned the phrase into the earworm we know today.

At first sight, the old wrought iron fence on the corner of P and 28th streets appears indistinct from the many other railings that skirt Georgetown’s redbrick sidewalks. Upon closer inspection, however, it’s clear this fence is unique. Cracks in some of the pickets reveal that although each upright is hollow, the walls of the pickets are far thicker than is structurally necessary for a perimeter fence. Plus, a number of the pickets feature small nubs just below the attached spikes, which, even to the untrained eye, resemble gun sights. While the Gun Barrel Fence has long been a Georgetown landmark, the fence’s origins remain shrouded in mystery and misconception. Let’s bust some myths, shall we? 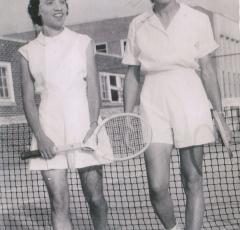 Decades before Venus and Serena Williams dominated women’s tennis on the WTA tour, the Peters Sisters — Margaret Peters, a.k.a. “Pete", and Roumania Peters, a.k.a. “Repeat” — from Georgetown, were unstoppable champions in the all-black American Tennis Association. 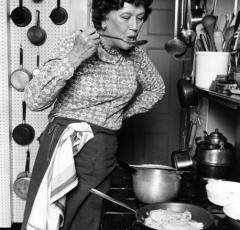 Julia Child was a giant of French cooking, but before she became a legend in the kitchen she worked in the Office of Strategic Services -- the precursor to the CIA -- in Washington, D.C.

Let's take a moment to explore one of Washington’s horrific nineteenth-century professions, the professional grave robber. Known as “resurrectionists” by the media outlets that covered their deeds, grave robbers haunted Washington’s many graveyards and potter’s fields in the cover of night, acquiring bodies to sell to local medical colleges. With several medical colleges operating in Washington during the later decades of the nineteenth-century, the District of Columbia became a hub of grave robbing activity in the United States. Their exploits may be thought of as morbid and disgusting, yet their contribution to modern medical science is an important one that is often ignored by medical historians.

For a medical professional to learn the skills to be a surgeon, a hands-on knowledge of human anatomy is essential. Potential surgeons need to perform dissections on human remains—remains that are intact and with as little decomposition as possible. In today’s society, supplies of subjects for dissection purposes are easy to obtain. In nineteenth-century America, acquiring needed subjects proved to be a challenge. During the eighteenth and nineteenth centuries, death traditions favored the condition of the corpse. Religious views proclaimed that the body should be buried in the earth to await eventual resurrection upon the Day of Judgment. Despite the pleas by the medical community expounding the importance of available bodies for dissection, people remained repulsed by the thought of former loved ones lying out upon a dissection table being poked, prodded and sliced by medical students.

You’ve heard of DUELING, now get ready for ROUGH-AND-TUMBLE. In the 1800s, more than a few disputes of personal honor were solved by shooting each other to death. But that’s what the gentry of the area did, so what did the common people do? Plain old hand-to-hand fighting and eye-gouging.

On Aug. 24, 1814, for the first and only time in our country's history, Washington, D.C. was overrun by an invading army. The British army had easily defeated inexperienced American defenders, and set the city ablaze. The President fled to Brookeville, MD, and many of the citizens had fled along with the army. Those few residents of the capital who hadn't already fled may well have prayed for anything that could stop the flames. What they got, however, was something far more than they were hoping for: a "tornado" more powerful than any storm in living memory.