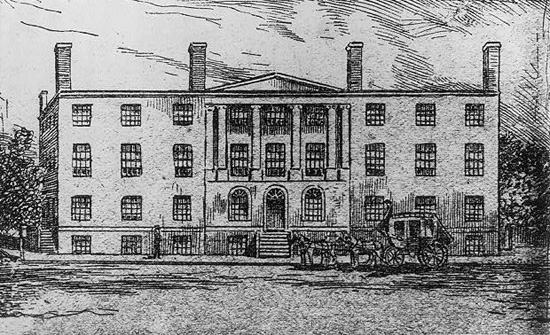 When the British burned Washington in 1814, Congress needed a new home. They found one at Blodgett's Hotel and were able to settle disputes about where the nation's capital should be located. Maybe today's Congress should consider a change of scenery! (Photo source: Library of Congress)
August of 1814 was a pretty hot month, thanks to Mother Nature… Oh, and the British. After trouncing local militia troops at the Battle of Bladensburg, the redcoats burned the majority of important government buildings in D.C. and chased President Madison out of town. In addition to the White House, the fires destroyed the Senate’s wing of the Capitol and turned much of the Library of Congress’ books and manuscripts into smoldering ash. The intense heat melted the marble chamber into limestone, transforming the room into “a most magnificent ruin.”[1]

Beyond cleaning up the damage, there was the obvious problem of getting the government back up and running. After all, the President and Congress had to do their work somewhere.

Fortunately, Madison was on top of it. Once the Senate returned to session, he had it relocated to a spot most Senators probably already knew well: Blodgett’s Hotel, a.k.a. the tavern down the street. On September 19, 1814, the Senate moved into these “emergency quarters,” which was also home to the city’s first theater, a post office and the U.S. Patent Office. It was quite a large building, occupying the entire block between 7th and 8th and E and F Streets NW.

The Senate’s new home had almost been a victim of the fires itself. Luckily, one man convinced the British that the property inside belonged to investors and thus should be left alone. It worked, and thank goodness for it, or else who knows where Congress would have met… Or whether the District of Columbia would have remained the capital of the nation.[2]

Big questions surfaced about whether Congress should relocate the Capitol or rebuild it on the original site. One senator suggested building a new unembellished capitol building somewhere near Georgetown (that’s no fun!). Several leaders proposed moving the Capital of the United States a bit farther… like Philadelphia. (Northern Congressmen had long argued that the nation’s capital be located in a more established, cosmopolitan city and the burning of Washington renewed these calls. As you might imagine, most Southerners felt differently.)

After almost six months of deliberating, it was decided that the original Capitol would be rebuilt on its old site. Congress allotted $500,000 for reconstruction, and hired Benjamin Latrobe to oversee the project. Latrobe had previously been involved with the construction of the original Capitol building but that building had been largely designed by William Thornton. Now, given the opportunity to lead the reconstruction, Latrobe made some changes to the old design. The new Capitol building would far more spacious than the old one as a larger chamber and extra committee rooms were added.

While construction was underway, Congress continued to meet at Blodgett’s Hotel for over a year, before moving to a temporary brick Capitol building that was hastily built on the modern site of the Supreme Court.[3] The new and improved Capitol (re)opened in 1819.

As it turned out, the days of Blodgett’s Hotel were numbered. In 1836, a servant inadvertently dumped hot ashes in a wooden refuse box and the famous building burned to the ground.[4] Today, the Hotel Monaco sits on the site. It’s likely a much fancier establishment than Blodgett’s ever was. But it was never the Capitol of the United States.