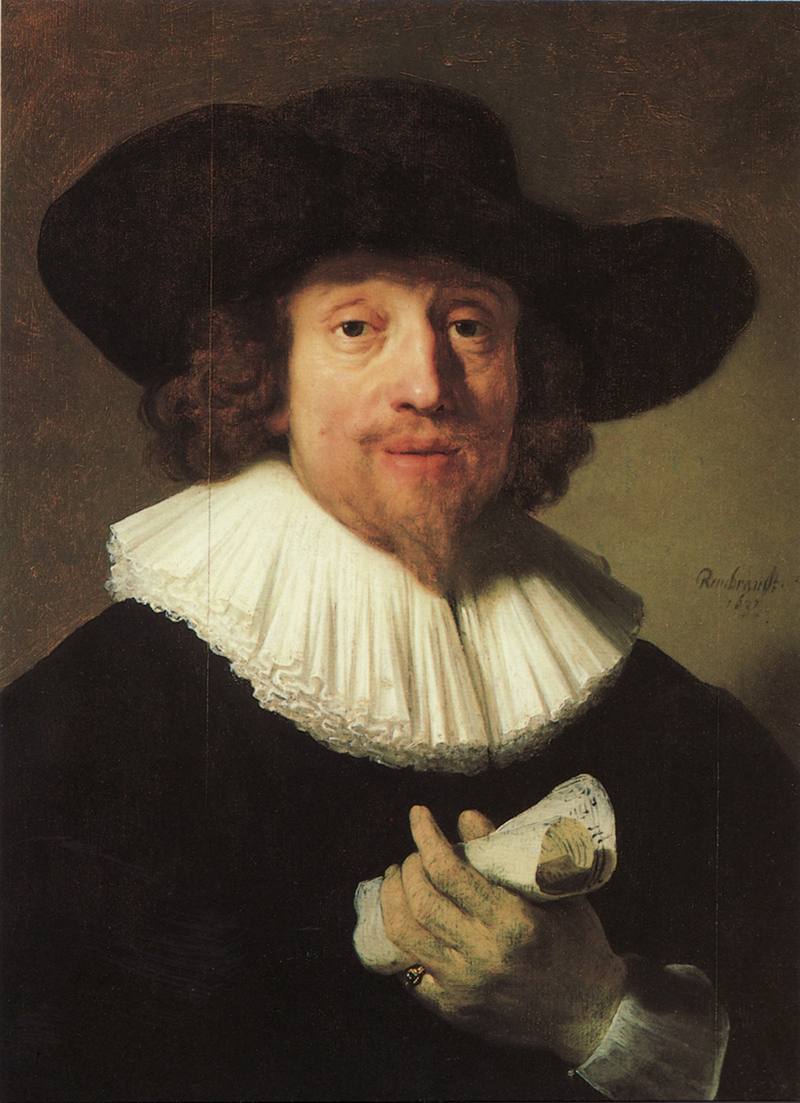 Nobody is 100% sure who this Rembrandt painting depicts but it is clear that it was damaged by a would-be thief in 1959 at the Corcoran. (Source: Wikimedia Commons.)
The 145-year-old Corcoran Gallery of Art, Washington's oldest private art museum, announced that it will be taken over by George Washington University and the  National Gallery of Art and cease to exist as an independent institution. That makes it a good time to look back at one of the more bizarre events in the history of art in Washington--the attempted theft in 1959 of a painting by 17th Century master Rembrandt Harmensz van Rijn.

The crime is notable because although Washington has a long history of thefts of antiquities from its museums--including the pilfering of a set of George Washington's false teeth from the Smithsonian in 1981--there have been relatively few art thefts. This Washington CityPaper article on local museum thefts listed only two art heists. One was the 1975 pilfering of Thomas Moran's 1903 painting "Valley of Cuernavaca" from what was then the National Collection of Fine Arts (now the Museum of American Art), where it had been left propped against a wall by workers. The painting turned up 19 years later, sans provenance, at a local auction house, and the dealers promptly notified authorities. The other notable crime was the 1983 theft of "Virgin of Alsace," a 1920 statue by Antoine Bourdelle, from the Phillips Collection, by a thief who bizarrely left the statue in an alley near Dupont Circle, inside a trash bag with a note criticizing the museum's security measures. But the District has never had a truly gigantic art crime, akin to the theft of Leonardo da Vinci's Mona Lisa from the Louvre in Paris in 1911, or the theft of eight paintings--including Rembrandt's "The Storm on the Sea of Galilee"--by thieves dressed in police uniforms from Boston' Isabella Stewart Gardner Museum in 1990.  (Here's a 2001Forbes article on the 20th Century's greatest art thefts.

But, I digress. Flash back in time to the afternoon of Sunday, Nov. 29, 1959, when a would-be thief who has never been identified entered the Corcoran and strolled to the wall where the Rembrandt painting--a bearded man in a dark hat and cloak, clutching a roll of paper emblazoned with musical notations--was hanging. (Since the artist never got around to giving it an official name, the museum called it  "Man with Hat Holding Scroll," though others over the years have called it various names, including "Man with a Sheet of Music" and "Portrait of a Musician.")

The painting, signed and dated 1633, had an intriguing history. It had once been part of the European art collection of William A. Clark, a Pennsylvania-born adventurer who fought on the side of the Confederacy in the Civil War, and then afterwards headed west to Virginia City, Mont., where he made a fortune, first as a copper miner and then by selling food and supplies to other miners at vastly inflated prices. In 1899, Clark reportedly bribed members of the state's legislature to appoint him as a U.S. Senator, but word of his scheme leaked, and he was forced to resign. He won an appointment fair-and-square in 1901, and served a six-year term before he lost his taste for politics and decided to move to New York City, where he lived in a 100-room Fifth Avenue mansion that he filled with paintings.

Upon his death in 1925, Clark's will directed that his collection go to the Metropolitan Museum of Art, which was near his home. But according to biographers Bill Dedman and Paul Clark Newell, Jr., Met officials there decided not to accept the bequest, in part because the quality of the paintings was uneven, and partly because there were questions about the authenticity of some of the works. Instead, Clark's estate offered the collection to the Corcoran, his second choice. Clark had been a patron of the Washington museum, donating $100,000 to endow prizes for American artists, and once lending 86 of his paintings for a 1904 exhibition. Clark reportedly gave then-President Theodore Roosevelt, a fellow art lover, a private tour of that show. When the Corcoran agreed to accept Clark's artwork, his heirs also put up $700,000 for the construction of a new Clark Wing, done in neoclassical style. In 1928, the works were unveiled for the public at an event featuring President Calvin Coolidge. One of the attractions was Rembrandt's mysterious man holding the music.

The painting had a certain air of mystery about it. Nobody really knew for sure who the portrait depicted, though the most widely accepted theory, first proposed by art historian Bruno Maerker in 1937, was that it depicted the illustrious German composer Heinrich Schütz, whom some believe visited Amsterdam and met the artist the year the painting was made. But a 1978 article in Symposium, the journal of the College Music Society, presents the convincing alternative theory that Rembrandt actually painted his friend Constantijn Huygens, a diplomat, scholar and amateur musician. (Some also have questioned whether the work was an authentic Rembrandt, according to Dedman and Newell.)

The thief, though, probably was more focused on the fact that the painting probably was worth a lot of money. (Indeed, it was valued by the museum at $100,000, which in today's dollars would come to about $873,000.)

At the time, the Corcoran had only five guards on duty, not enough to watch over every part of the museum continuously. That enabled the thief to have at least a moment alone with the 26 inch-by-18 1/2-inch painting. He (or she) apparently then pulled out a razor blade or a knife, and set about cutting the painting out of its frame. As then-Corcoran director Herman W. Williams Jr. later explained to the Washington Post, the criminal clearly wasn't a professional. "Any sophisticated thief would have known enough to look in the catalog. Then he would have known that he couldn't have gotten the panel out without having a saw." The painting wasn't a canvas, but rather an oak panel. Upon realizing the blunder, the perpetrator probably slipped the knife back into a pocket or purse and fled the scene.

It wasn't until the next morning that Russell J. Quandt, the Corcoran's restoration expert, noticed that the painting had slashes along its right and bottom edges. A little more than two weeks later, according to a Washington Post account, Quandt started the painstaking job of repairing the damage and also strengthening the painting to protect it from decay. In addition to filling the slashes with a colorless resin, Quandt actually applied a protective coating of tissue, gauze and water-soluable glue to its surface. Then he began using a power tool to cut into the painting's oak base, down to a 1/16th of an inch from the surface. He then used hand tools to plane down the base until only a thin film--the actual image--remained, and then carefully applied that to a new, more moisture-resistant base.

The restoration also gave Quandt an opportunity to investigate some of the mysteries surrounding the painting. Art scholars had noticed years before that the portait subject's hand and the scroll containing musical notations had been painted over the black surface of the man's overcoat. Some suspected that those details might have been added much later, by someone other than Rembrandt. After Quandt analyzed the painting, however, he concluded that the paint used in the hand and scroll was chemically identical to the rest of the painting. That suggested that the everything had been done pretty close in time, and that the hand and scroll probably had been done by Rembrandt or someone supervised by him.