For the first weeks of his presidency, Calvin Coolidge conducted business from a different iconic D.C. residence — the Willard Hotel. The Coolidges lived at the hotel while he was Vice President and they waited to move to the White House until Warren Harding’s family had time to move out after he died in office.

In 1993, then President-elect Bill Clinton’s choice of location for his inaugural morning prayer service was certainly a departure from precedent. For the first time in history, this time honored tradition took place at a historically Black church: Metropolitan African Methodist Episcopal on M Street in downtown Washington. Church officials and clergy were pleased -- as Metropolitan administrator Roslyn Stewart Christian said: “He picked a neighborhood church … 1600 Pennsylvania Avenue is right around the corner. He intends to be our president, our leader and our neighbor.” 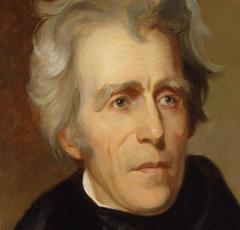 As the presidential election of 1828 approached, the nation’s emotions were running high. Andrew Jackson, the former Governor of Tennessee, was to challenge incumbent president John Quincy Adams. This was a partial rematch of the controversial four-way contest of 1824. Jackson won the most popular and electoral votes, but because no candidate won a majority, the election went to the House of Representatives, who chose second-place finisher John Quincy Adams. Jackson and his supporters were furious. Calling it the “Corrupt Bargain,” Jackson’s supporters accused fourth-place candidate Henry Clay of selling his supporters to Adams for the job of Secretary of State. This set the stage for the most vicious campaign ever seen at that point in American history. 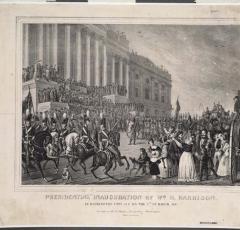 Sometimes, the most memorable thing someone can do is die. William Henry Harrison, the ninth president of the United States was the first U.S. president to die in office, and, having died only a month in, that's about all he did in office. Harrison's other claim to fame, his lengthy inauguration speech, is also what killed him.

March 4, 1841 was an wet, overcast day with a cold wind. John Quincy Adams wrote in his diary that the celebrations of the day were the biggest seen in the country since 1789. Harrison, nicknamed “Tippecanoe,” had run a campaign on an image of log cabins and hard cider and his supporters were a boisterous sort. A magnificent carriage had been constructed and presented for Harrison to ride to the Capitol. The old general declined and instead rode a horse along the avenue.

March 4th, 1873 — Ulysses S. Grant's second inauguration — still stands as the coldest March day on record for Washington, and by all accounts it was an unmitigated wintry disaster.