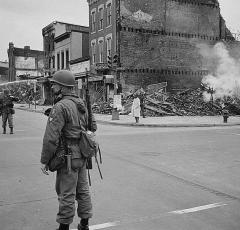 By the time John Layton was named Metropolitan Police Chief in 1964, there was a well-established undercurrent of hostility between the Police Department and Washington's inner city African American community. Layton added resources to the Community Relations Unit and promoted the first African American to the rank of Captain. He created a Public Information Division to better coordinate communications with the public and the media. And, in an effort to recognize the African American community’s complaints about police brutality and harassment, the chief went on record that the Metropolitan police department would not rely on lethal force should they need to put down a riot.

Layton’s actions were put to the test on April 4, 1968. Martin Luther King Jr. was assassinated in Memphis, TN that day, and when word reached Washington, D.C., angry crowds began gathering in the streets. 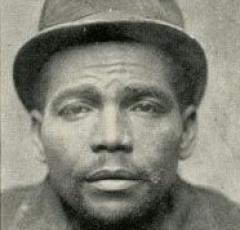 In the winter months of 1893-1894, D.C. area folks were plagued with the fear of a mysterious man dubbed “Jack the Slasher.” Nicknamed after London’s infamous “Jack the Ripper” of 1888, this Jack silently entered homes at night and left just as stealthily as he came, leaving a violent mess behind him.  Police were perplexed, women and children terrified, and men poured money into the protection of their houses. But before you start thinking the worst, know that he wasn’t that kind of slasher. Rather than human flesh, the target of his knife was textiles. He cut up furniture, clothing, carpets, and anything he could get his hands on, while taking little for himself. Why? Even after he was caught, no one was able to ascertain a real motive.

Jack’s robberies started in October 1893 at the home of Nick Young, President of the National Baseball League, in Mount Pleasant. He entered by cutting the slats of the shutters and sliding through a back window while the house was sleeping. Young woke to his residence in chaos: “the bric-a-brac and furniture therein [were] almost completely destroyed… The walls and pictures were besmeared with mud, while chairs and carpets were cut with a keen knife.” When police were called to the scene of the crime, they were mystified, remarking they had never seen anything like it. And Jack was just beginning.

1940 was a big year for municiple services in northern Virginia. Sparked by the growing population in the region, Arlington created professional police and fire departments and Fairfax created a police department of its own. In celebration of the ACPD's 75th Anniversary, the department has put together a book featuring photos and stories about the history of law enforcement in the county.

Angry mobs clashing with police… Looting… Flames…. It was a scene out of the 1968 riots. But this was a different time and place. The year was 1991 and D.C.’s Mount Pleasant neighborhood was boiling over.

The firestorm started at around 7pm on the evening of May 5. Angela Jewell and Girsel Del Valle, rookie cops from the Metropolitan Police Department’s 4th District, were out on patrol in the neighborhood. They approached a group of men who appeared to be drinking in public at 17th and Lamont Streets, NW. Angry words were exchanged and the men supposedly became disorderly. The officers began to make arrests.

What happened next was the source of some debate. 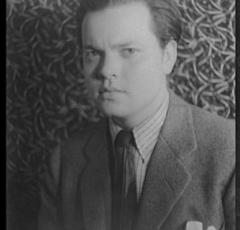 In 1938, Welles caused mass panic as many listeners to his The Mercury Theater Over the Air drama program on CBS radio thought that he was reporting on a real alien invasion.

Locally, Washingtonians heard the show on WJSV, the precursor to today's WTOP and the broadcast got quite a reaction. Phone switchboards were overwhelmed as frightened listeners called their loved ones and contacted the radio station for the latest news. Even some law enforcement personnel were duped. Afterwards, area residents blamed a variety of factors for the hysteria.