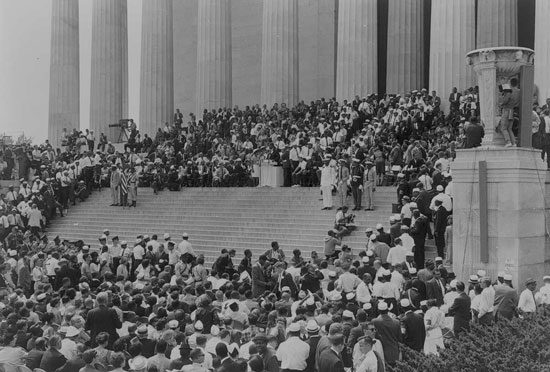 March on Washington participants on the steps of the Lincoln Memorial, August 28, 1963.
Next Wednesday marks the 50th anniversary of the 1963 March on Washington, one of the watershed moments in American History and the Civil Rights struggle. On August 28, 1963 over 250,000 marchers peacefully demonstrated in the nation's capital under the mantra of "jobs and freedom" for all Americans regardless of skin color. The march is widely credited with helping to pass the Civil Rights Act (1964) and the Voting Rights Act (1965).

To commemorate the 1963 March, there will be two different marches through the streets of Washington in the coming days. On Saturday, August 24 at 8am, the National Action Network is organizing a rally with Rev. Al Sharpton and Martin Luther King III at the Lincoln Memorial. Following the rally, participants will walk en-masse to the Dr. Martin Luther King, Jr. Memorial. On Wednesday, August 28 at 8am, the Center For the Study of Civil and Human Rights Laws is organizing a procession from 600 New Jersey Ave. NW to the Lincoln Memorial.

In addition to these marches, there will be many other celebrations happening around town to mark the anniversary. We've listed a few of the larger ones below. For more, check out The Root's Guide to March on Washington Celebrations and the 50th Anniversary Coalition for Jobs, Justice and Freedom website. Hope that you can take part in one or more of the events!

The National Archives presents an iconic photograph of a young girl, Edith Lee, who celebrated her twelfth birthday by attending the March on Washington with her mother. This photograph, taken by a photographer hired by a Federal government agency, especially captured the spirit of the marchers and has become emblematic of the day. In addition, the Archives will show screenings of James Blue's 1964 film, THE MARCH.

The Newseum has launched its new exhibit "Make Some Noise: Students and the Civil Rights Movement," that explores the new generation of student leaders in the early 1960s who fought segregation by making their voices heard and exercising their First Amendment rights. Amongst other artifacts, the exhibit features a section of the original F.W. Woolworth lunch counter in Greensboro, N.C., where in 1960 four African-American college students launched the sit-in movement.

The Historical Society of Washington will commemorate the anniversary with an engaging panel discussion that will explore the local impact of the March on Washington in the context of the photographers who documented the historic march and the way that newspapers covered the event.

National Museum of American History has launched an exhibit: “Changing America: The Emancipation Proclamation, 1863 and The March on Washington, 1963” that explores the historical context of these two crucial events, their accomplishments and limitations, and their impact on the generations that followed. The museum will also be having a special open mic commemoration of the March on August 28, wherein visitors can share their memories and thoughts.

The Library of Congress opens its "A Day Like No Other: Commemorating the 50th Anniversary of the March on Washington" exhibit consisting of photographs by newspaper and other media photographers, independent photojournalists and people who participated in the march. The images convey the immediacy of being at the march and the palpable excitement of those who were there.

The National Portrait Gallery is having a special "March on Washington 50th Anniversary Family Day" on Saturday, August 24 from 11:30am - 3pm. This fun event for the whole family allows visitors to tour the One Life: Martin Luther King Jr. exhibition to learn more about the civil rights leader and his famous “I Have a Dream” speech, make slogan buttons with the National Museum of African American History and Culture, and enjoy a host of other activities.

Howard University is celebrating the anniversary with a series of events this weekend (August 23-25) including a day of service, a chapel service, the premiere of 1963: The Year that Changed America, and a discussion with the film's producer, Howard Alumnus Andrew Young (B.A. '51).

The George Washington University celebrates the anniversary with a special evening of cinema, song, and spoken word narrated by Dr. Eddie Glaude at Lisner Auditorium on August 28 at 7pm. "Soundtrack of a Movement: Freedom Songs in Perspective," highlights include performances by GW faculty, alumni and students, and spoken word artist Toni Lightfoot, as well as footage from the award-winning documentary Soundtrack For A Revolution. There will be reflections from Julian Bond, who stood with Dr. King during the March, and musical tribute by Patrick Lundy and The Ministers of Music featuring urban jazz harmonicist Frédéric Yonnet.

UPDATE: This post was originally published to spread information for the 50th anniversary of the March on Washington. All events happened in 2013, but there are still some interesting sources you can learn from in the links.