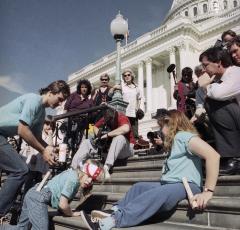 When Congressional delay jeopardized the Americans with Disabilities Act, protesters responded with a powerful demonstration on the Capitol steps.

During the Civil War, the U.S. Capitol served stints as a military barracks, a bakery, and a hospital for wounded soldiers, all while the building was under construction. After the war, the bakery was dismantled and the soldiers left — well, all but one …

From 1920 to 1930, George Cassiday was a bootlegger for Congress. He sold alcohol to four out of every five members during Prohibition, and at one point had an office inside the House Office Building. After his arrest for possessing alcohol, Cassiday told his story in The Washington Post.

It was a long wait for sculptors and local politicians.

Since 2008, a seven-foot tall, 1,700 pound bronze statue of abolitionist Frederick Douglass stood in the lobby of a building called One Judiciary Square. It remained there for five years while Washington officials fought to move it to another building less than a mile down the road: the U.S. Capitol.

Today marks the one-year anniversary of the unveiling of Douglass’ statue in the Capitol Visitor Center’s Emancipation Hall. The ceremony was the culmination of a fight spanning over a decade.