During the Civil War, the U.S. Capitol served stints as a military barracks, a bakery, and a hospital for wounded soldiers, all while the building was under construction. After the war, the bakery was dismantled and the soldiers left — well, all but one … 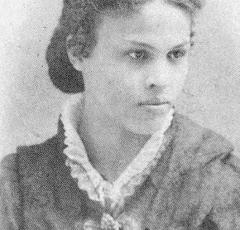 To close off Women's History Month, learn about Sarah Marinda Loguen Fraser, the first woman to receive an M.D. from the Syracuse University College of Medicine, and the fourth Black woman to become a licensed physician in the United States. While her extraordinary life took her all around the world, including New York, the Dominican Republic and France, some of the most important landmarks of her life happened in Washington, D.C.

In December of 1986, parents were rushing to the stores to snatch a Cabbage Patch Kid, G.I. Joe or Teddy Ruxpin off the shelf before they were all gone. That same month, the generosity of a local benefactor was a touching reminder of what the holiday season is really about. On Dec. 21, 1986, Robert Alfandre welcomed 30 people infected with AIDS into his home in northwest Washington for a Christmas party.

April 26, 1954, wasn’t an ordinary day at work for Dr. Richard Mulvaney. As McLean, Virginia’s first general practitioner, he treated all types of patients, but he’d never dealt with a situation like the one that awaited him at Franklin Sherman Elementary School that morning.

On October 11, 1987, Washingtonians woke up to an elaborate quilt blanketing the National Mall, with 1,920 panels stitching together the memory of thousands of individuals who had succumbed to the AIDS epidemic in America. The AIDS Memorial Quilt helped push the disease into mainstream America's consciousness. But for Washington's gay community, the battle against AIDS had been raging for almost a decade. 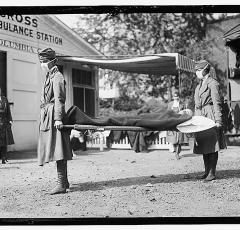 In the fall of 1918, a deadly influenza epidemic raged in Washington, D.C. Entire families were wiped out; some people died within a day of showing symptoms. City officials, meanwhile, had a difficult job: figuring out what to do with the bodies.

Prior to 1909, Harry Bradford had almost never landed himself in the paper. He appeared in The Washington Post once, when it announced that the Kensington Orchestra was going to be performing in the near future. (Bradford played violin.) But other than that, nothing. And yet, in 1910, Bradford’s name was in all caps on the front page of the Post. “Bradford told to quit,” the headline read.

1917 wasn't the first time D.C. banned alcohol. In the midst of a cholera epidemic 85 years earlier, the city's Board of Health banned the sale of all liquor.

To conclude our series on Washington, D.C.’s professional grave robbers, we’ll focus on one of the most interesting individuals to ever stalk D.C.’s cemeteries, Vigo Jansen Ross. Like most professional grave robbers of the era, information comes mainly from local newspapers. Jansen in particular was quite well known as someone who loved the attention that the media could provide for him. Jansen claimed to have been born in Denmark in the late 1840s or early 1850s. It is unknown when he made his way across the Atlantic to America, but it seems that he studied medicine in his native Denmark and came across the sea to ply his trade in the growing American market. Jansen brought the love of drinking across with him, which destroyed any hope he had of pursuing a career in medicine, forcing him to provide bodies for medical colleges to make a living. 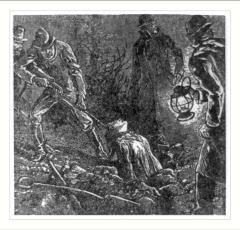 December 13, 1873. The streets of Washington, soupy with mud from the previous day’s rains, began crystallizing with slick patches of ice as the first kiss from winter’s lips touched the city. Despite the oncoming cold, Officer Hawkins remained focused, his suspicions high. Nearby, a horse-drawn wagon and its female occupant continued to sit idle near the circle of 22nd Street. Upon earlier questioning, the young woman claimed she was only waiting for her husband to conduct business in a nearby home. Yet as the minutes ticked past midnight, the hairs on Hawkins’ neck began to stand on end—no honest business took place this late into the night.